I had to get my car serviced in Sarasota last Monday so I had a couple of hours to kill.  Since the dealership was kind enough to give me a loaner, I decided to check out the John and Mabel Ringling Museum of Art in Sarasota (http://www.ringling.org/) and it is well worth the $25 admission charge.  (I thought it was free on Mondays, but that's only if you want to limit your visit to the art museum.)  The art museum is situated on a 66 acre piece of land on Sarasota Bay and your admission also includes a visit to the Circus Museum (which was my primary destination) and John and Mabel Ringling's home, Ca' d'Zan Mansion. I'm going to break my visit down into three separate posts since each aspect of the estate is worth writing about. 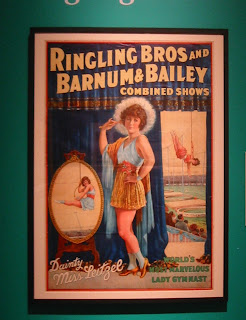 My first stop was the Circus Museum, which was fascinating.  There is currently a poster exhibit on display from various circuses.  Some of the graphics are really terrific, and I had to chuckle to myself when I read about the consolidation of circuses that occurred over the years.  (Having lived through the consolidation of the financial services industry during the last 15 years, I can empathize!)

I enjoyed looking at the posters but was much more taken with the photographs and newspaper articles.  Harry Atwell was the official circus photographer for the 1909 season and did a series of photos entitled "The Clown and the Show Girl".  While staged, some of these shots are fantastic and are intended to evoke the idea of Beauty and the Beast. I was saddened to read about the fire that occurred under the Big Top in 1944 in Hartford and claimed the lives of 168 people.  Five individuals who worked for the circus were arrested following the fire, which was attributed to a stray cigarette being tossed on the ground.  If this interests you, the website (http://www.circusfire1944.com/)  has extensive information.  (Maybe I was particularly interested in this because I'm watching the series Rescue Me on Netflix now!)

Of course, there was lots of information about clowns.  I'll be the first to admit that, like many people, I find clowns to be a bit creepy.  It was interesting, though, to learn a little about the place of clowns (more precisely, the predecessor to modern day clowns, the court jester) in history.  For instance, did you know that the role of a jester can be traced back to 1818 B.C. China?  Or that in the Middle Ages, court jesters were given a unique freedom of speech that was often a catalyst for social change?  In relatively recent history, clowns have provided social commentary to circus-goers.   Emmett Kelly, one of the world's most famous clowns, is remembered for his "Weary Willie" persona that was developed during the Depression.  His most famous routine was trying, unsuccessfully, to sweep up a pool of light being beamed from a moving spot light.  (I've had those Sisyphus-like days myself!) 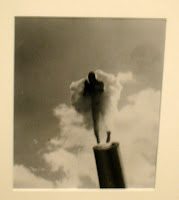 Like all circuses, the Ringling Brothers Circus had its share of the spectacular.  One exhibit featured the human cannonball, which has to be one of the craziest acts of all time.  In the 1940s, Ringling Brothers' cannonball act involved two sisters being shot through the air 140 feet at a speed of 125 miles per hour.  That is just downright ridiculous!

Cecil B. DeMille recognized that the circus was a fantastic subject for a movie and made the Greatest Show on Earth in 1952.  The movie won in the Best Picture and Best Writing categories.  The cast is fabulous and includes Jimmy Stewart, Charlton Heston and Dorothy Lamour.  Edith Head did the costumes for the movie (and earned a nomination for her work).  I have to admit that my curiosity has been piqued and the movie is going to be added to my Netflix queue.  The question is will I watch the movie before or after I re-read Water for Elephants?
at November 02, 2010