My last stop was the Ringling Museum of Art itself.  Unfortunately, I approached the Museum from the wrong side and ending up starting with the Searing Wing and working my way backwards through the galleries. Most people would start with the Museum, end with the Searing Wing and then exit to walk over to Ca' d'Zan through Mabel's Rose Garden and the Banyon Groves, but, as usual, I did things my own way.

I have to admit that the art on display at the Ringling Museum is not my favorite with its emphasis on works from the Baroque and Renaissance periods.  I was actually strolling through the galleries and thinking to myself, "Self, this isn't nearly as interesting as the Arcimboldo Exhibit was at the National Gallery" when I looked up and there were two Arcimboldo paintings right in front of me!  (And if I had any questions as to whether his art fit in with that of his contemporaries, it was resolved once and for all right then!)  I was astonished to learn that most of the works that are on display in the Museum were actually owned by Ringling and donated to the State of Florida as part of his estate .  When I was talking with one of the guards, he told me that Ringling owned another 500-600 paintings that are in storage because there just isn't room to display them.   Truly a collector on a grand scale.

The highlight of the Museum can be found in Galleries 1 and 2 -- five huge "cartoons" done by Rubens on the theme of the Triumph of the Eucharist. The works were commissioned by Rubens' royal patron, the Infanta Isabella Clara Eugenia, to provide the basis for a series of tapestries that would be woven and presented to the Poor Ciares, the Franciscan convent of the Royal Discalced Nuns in Madrid and are the actual size of the tapestries.  As you walk into the first Gallery, the space opens up majestically and you are surrounded by four amazing paintings . It truly takes your breath away.  One of the tapestries is also on display in the foyer as you enter.   If you are interested in reading more about Rubens and his works on display at the Ringling, you can go to http://www.willemswebs.com/ringlingdocents/pages/Galleries1&2.pdf 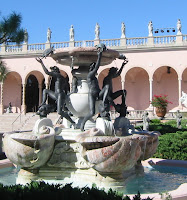 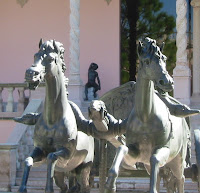 I then exited the Museum into a sculpture garden and courtyard that took me by surprise.  Once again, the Ringlings' love of all things Italian was front and center.   The setting was reminiscent to me of the Vatican with the sculptures (of saints???) on the roof of the building looking down at the visitors. The marble and bronze sculptures are beautiful--I particularly liked the horses and chariot pictured at the right.

The piece d'resistance, though, is the sculpture of the David that is at the end of the courtyard.  I had to laugh--the vision of the David, my all-time favorite sculpture that I spent hours in front of at the Academia in Florence, surrounded by palm trees was just too incongruous.  When I approached the sculpture, though, I learned that it is a 20th century bronze case from the marble original by Michelangelo.  Crazy!

Needless to say, I will be visiting the Ringling Museum of Art many times in the years to come.  I haven't even mentioned that the Historic Asolo Theater is also on the grounds.  http://www.asolorep.org/    But that is a topic for another day.
at November 04, 2010