Arcimboldo - Nature and Fantasy - at the National Gallery of Art 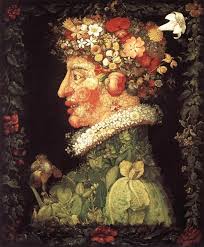 When on the DC leg of my October "Friends' Tour", Althea and I headed down to the National Gallery of Art.  Her son, Colin, had a summer internship at the NGA that he parlayed into a job for the Fall, so we decided to take a stroll through the Museum before we brought him home.  (As an aside, the NGA, like most museums in DC, charges no admission--it is truly a national treasure!)  The Arcimboldo Exhibit was front and center at the Museum and it was a strange and interesting one.  Note:  If you are interested in reading in detail about his life and work, this National Gallery link will provide you access to the brochure from the Exhibit.  http://www.nga.gov/exhibitions/arcimboldoinfo.shtm

Arcimboldo painted during the Renaissance era when, according to the Exhibit brochure, "the rise of the new sciences of botany, horticulture and zoology...focused artists' attention on the natural world to an extent not seen since antiquity."  Arcimboldo took this new focus to extraordinary--and bizarre--lengths, creating entire paintings using the forms of fruits, vegetables and animals.  He did several series of paintings and the one at right here is Spring, from his series on the seasons that was created for Maximilian II.  This is actually the most aesthetically appealing of the works that we saw to my eye with its use of seasonal flowers and warm tones.  Amazingly, 80 different varieties of flowering plants have been identified in this work.  Contrast this with the painting of Water from his series on the elements which he also created for Maximilian.  Here he uses fish and other aquatic life to create his image and I find it pretty disgusting, yet fascinating in its creativity. Arcimboldo's works were recognized as a bit of an inside joke by his contemporaries.   In particular, his series on the seasons and the elements were acknowledged as political allegories.  The brochure explains that "They represent a microcosm of the universe and proclaim the Hapsburg empire to be eternal like the cycle of the seasons.  Further, the disparate creatures and plants that coexist harmoniously in Arcimboldo's composite heads symbolize the peace and prosperity of Maximilian's magnificent reign."  If they say so!  What this really goes to show in my mind is that all art has to be put in the context of when it was created and all of the circumstances surrounding it.  Whether a particular work is visually pleasing or not may be important if you are going to buy the work and live with it day in and day out, but not if you are just taking it in.  In my mind, viewing an exhibit like this and having to stretch a bit to appreciate it is well worth the effort--and one of the joys of retirement is having the time to do so!

If you want to see more, you can find images of his complete works at http://www.giuseppe-arcimboldo.org/.
at October 29, 2010