I'll admit it. I'm a theater junkie. I love sitting in a dark theater and watching a story unfold. But I also enjoy listening to people talk about the process of getting a show from the page to the stage. Whether it's a madcap comedy, a high kicking musical or an intense drama, it's the job of the designers to create the trappings of the alternative world in which the actors and the audience will immerse themselves. It's a big responsibility.

Twice a season, Asolo Repo provides avid theatergoers the opportunity to hear firsthand from designers how they make their magic happen. And so I found myself front and center when dramaturg James Monaghan chatted with scenic designer Paul Tate dePoo III and costume designer Tracy Dorman about their work on "Murder on the Orient Express." The show is a comedic adaptation by Ken Ludwig of the Agatha Christie mystery. As always, the talk was both fun and educational.

DePoo and Dorman have clearly developed a great working relationship. Their conversation flowed easily, with each listening with interest to what the other had to say. For ease of sharing their thoughts, I'll break it down by designer. 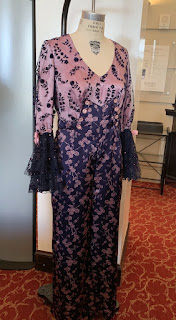 Dorman's work on "Murder on the Orient Express" is her seventh engagement at Asolo Rep. Most recently, she designed "The Crucible." It would be hard to imagine two more different aesthetics. The colors of the costumes in "The Crucible" were unrelenting shades of brown. Dorman explained she utilized the drab tones to convey how trapped these characters were in their small environment.

The characters in "Murder,,,," on the other hand, are constantly in motion -- literally. The fabrics and colors and designs are luscious. Just check out these silk pajamas. As Dorman said, "Who would really wear these to bed?"  Those sleeves would be a serious nuisance.

Dorman's favorite part of her work comes when collaborating with the actors in the fitting room. "The real joy," she said, "Is in helping them find their characters." Take, for instance, her time with Jim DeVita, who plays Hercule Poiret. The detective is a bit on the persnickety side. And so she and DeVita spent time talking about the costume details that the audience might not notice but that help build their characters' identities, like how his pocket watch should be placed and how his handkerchief would be folded. The finessing doesn't end until opening night. 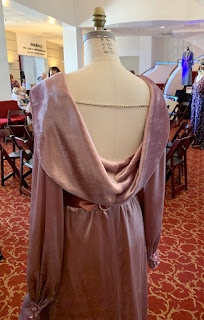 When asked about the importance of tech night, Dorman laughed and shared an incident that had taken place the previous evening. One of DeVita's wardrobe changes somehow didn't make it onto the schedule, and he ended up on the other wing of the stage from his clothes. It was pretty obvious something had gone awry when he appeared onstage half-dressed. That take is one for the blooper reel.

The Asolo's production of "Murder..." uses video to a number of ends, including providing the backstory for some of the characters. Dorman had been slightly apprehensive when she realized just how much video there would be. Her costumes are, after all, designed for the stage rather than the screen.

Having seen the final product, Dorman is a clear convert to the video component. She marveled at how much complexity it adds to the story. "I probably shouldn't say this, but the writing of the show almost doesn't deserve this level of beauty," Dorman opined. It's the perfect segue way to dePoo's scenic design.

DePoo was just as charming as he was at the brunch when he discussed his scenic design for "The Sound of Music." When Michael Donald Edwards called him and said, "Dahling, Orient Express,,,,", dePoo had to give it some serious thought. Marked across his January and February calendar in bold print were the words "Make Sure It's Worth It." It's often difficult, he explained, for people to get back into the groove post-holidays. An opening scheduled for early January was fraught with opportunities for disaster. DePoo is very grateful he said yes. 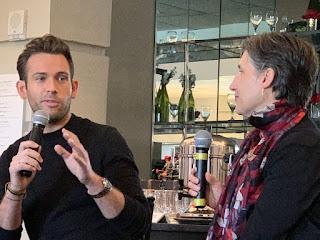 One factor that drove his decision was having seen the original production of Ken Ludwig's adaptation at a theater that will remain unnamed. It was terrible. The design included three separate train cars and left him feeling exhausted. He knew he could do better.

With a bit of chagrin, dePoo shared that his original idea for the scenic design was an abstract sense of a train. "If the curtain had risen and the audience just saw a bunch of lines, it would be pretty disappointing," he said with a laugh.

The final design -- more or less -- was the result of an all-nighter he pulled after the design team met with director Peter Amster back in May. While I haven't seen the show yet, word is the set is spectacular -- and about as diametrically opposed to an abstraction as you can imagine. DePoo said he had to apologize to the production team responsible for creating the train cars. They had breathed a sigh of relief when he originally told them no wood detail would be required. Oops!  And -- spoiler alert -- the elaborate set is on a turntable that allows both sides of the train car to be visible and creates a sense of motion.

DePoo is in awe of the final product created by Vic Meyrich and his team at the scenic studio. "It's insane what this company has built," he said. "It's ginormous." And let's not forget that the show will soon be in repertory with "The Lifespan of a Fact" and "Into the Breeches," so the set must be moved on and off the stage with great frequency. The logistics are daunting.

The pair were in agreement as to their favorite element of the show -- a scene that takes place on the Observation Deck of the train. In a show jam-packed with action and movement, it's a quiet moment when lights sparkle and a character turns and reveals the low-cut back of the dress shown above. Dorman said, "It's cinematic, but magic. And that's theater. That is why we go to the theater."