It's always a treat to hear an author talk about her book. But when Cassandra King Conroy took the mic, she was there to do more than promote her memoir "Tell Me A Story: My Life with Pat Conroy." She also wanted to remind people how groundbreaking Conroy's books were and to give his readers a sense of what he was like as a person. I left with a new appreciation for his work.

The title of her memoir comes from Pat's unflagging interest in other people's lives. "Tell me your story," he'd often say, including to readers standing in line for an autograph. Both the lines -- and the time it took to get to the front -- were apparently legendary. Not surprisingly, Cassandra had a good story of her own about how the two met. 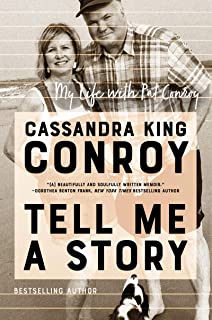 The time was the late '90s, and Cassandra had her first book coming out.  She was invited to a writers' conference at which the famous Pat Conroy -- one of her favorite authors -- was going to speak. When she checked in, she asked if he was around and was told he'd already left for the evening. She consoled herself by heading to the refreshment table. After all, she had missed dinner.

Just as she stuffed something a bit cumbersome in her mouth, a scruffy looking guy ambled over and they started talking. She was taking such delight in her makeshift meal that he asked for her recommendations on what to try. They walked around the table and she pointed out various tidbits that she'd enjoyed. One of Cassandra's friends eventually joined them, saying, "Oh, Cassandra, I see you met Pat! Have you told him about your book?" Yikes -- in so many ways.  It turns out Pat thought she was the caterer while she had mistaken him for someone's husband forced to attend the event.  From that rather inauspicious beginning came more than two decades together. 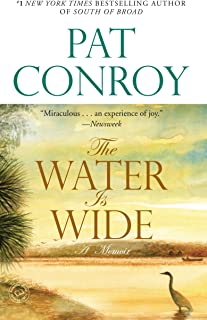 It's been a while since I read any of Conroy's books, but my vague recollection was that "The Great Santini" was autobiographical. Cassandra confirmed my memory, noting that it had taken a lot of courage for Pat to write about his relationship with his abusive father. (Remember, the novel was written in 1976, long before tell all books became the norm.)

But "The Great Santini" wasn't the first -- or last -- of Pat's books that shed light on social issues.  In 1972, he published a memoir entitled "The Water is Wide." In the book, Pat shares his experience teaching Gullah children in a two room schoolhouse on Yamacraw Island, South Carolina. The education these kids had received was woefully inadequate; many middle schoolers were reading at a first grade level. Corporal punishment was routine, and the students had grown to associate learning with pain.

Pat set out to change these children's relationship with education. He eschewed books in favor of real-world experiences, often taking the students to the mainland. His approach was not favored by school administrators. Despite support from the parents, Pat was fired for "gross neglect of duty and conduct unbecoming" and blackballed as a teacher. The students' loss became the literary world's gain.

Later books in which Pat tackled societal issues include "The Lords of Discipline," a novel about hazing rituals at Citadel. (It's one of three books Pat wrote that were inspired by his experience as a Citadel cadet.) The upshot: Pat was banned from the campus and any Citadel-related events for many years. Cassandra shared that there were times when the situation had settled down and Pat was close to being brought back into the fold. Inevitably, he would make an inflammatory comment that would reignite the battle. 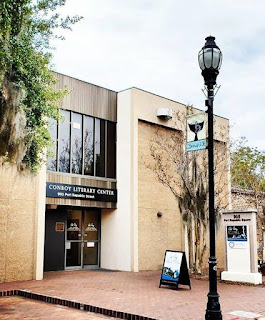 After Pat died, his hometown of Beaufort wanted to do something special to commemorate his life. It was suggested that a statue would be a striking memorial. The town administrators were a bit taken aback when Cassandra summarily rejected that idea. What they didn't know was that Pat and Cassandra had discussed this very idea on a trip when they came upon a statue of a prominent local author. "Don't ever let them do that for me," Pat said. "It would just give the pigeons a chance to do what the critics have done."

Instead, the Pat Conroy Literary Center now stands proudly in Beaufort.  Its mission is to "nurture a diverse community of writers, readers, teachers and students by offering educational events that celebrate the transformative power of story..." The Center offers a variety of programs, from author readings to mentorships for writing students to professional development for English teachers. Cassandra is not alone in thinking this is a much more fitting memorial to Pat. To read more about the Center, click here.

Thanks to Copperfish Books for bringing Cassandra King Conroy to Punta Gorda. It was an afternoon everyone in attendance will long remember.