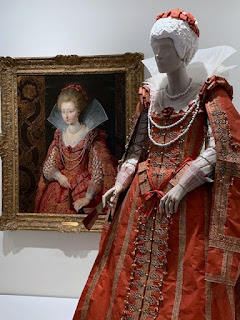 The Isabelle de Bortchgrave: Fashioning Art from Paper exhibit was stunningly beautiful, mindbogglingly creative, and educational to boot. What more could you ask for in an art outing?

Take, for instance, this gorgeous recreation of a gown worn by Charlotte-Marguerite de Montmorency, Princess of Conde.  We know the Princess wore this gown because it's captured in the painting by Rubens of Her Royal Highness that is conveniently on display on the adjacent wall. The Frick Art and Historical Center in Pittsburgh owns the Rubens and commissioned de Borchgrave to create this sculpture in connection with the traveling exhibit. And remember, every bit of the intricate sculpture, from the pearls to the button-and-loop closures to the rebato (or stiff flaring collar) is made of paper.

And here's a bit of history for you. At age 15, Charlotte-Marguerite acquired her title when she married Henry II of Bourbon. But there had been competition for the young woman's favors (if not her hand in marriage). Dirty dog Henry IV also had his eye on Charlotte-Marguerite. There was, after all, only a 43 year age difference between the would-be lovers. It is thought her husband saved her from becoming Henry IV's mistress by whisking her out of the country following their marriage. The King died one year later, making it safe for Charlotte-Marguerite to return to France.

While the entire exhibit was superb, my favorite room celebrated Les Ballet Russes.  The vibrancy of the costumes -- designed by the likes of Picasso and Matisse -- made my eyes pop and my heart sing.

Sergei Diaghilev established the Ballet Russes in 1909 to perform ballets that embraced all things modern. The productions were true collaborations among leading composers, choreographers, dancers, and artists, the likes of which the world had never seen. (Think Stravinsky, Balanchine, Nijinsky and Dali.)

Stravinsky's The Firebird was created for the Ballet Russes and was performed as part of the program that toured the United States in 1916. In a tip of its hat to the exhibit, the Naples Philharmonic performed The Firebird at its March concert.

The music wasn't the only thing that soared in the concert hall. Suspended above the musicians were some of de Borchgrave's Les Ballet Russes sculptures. I would love to know whether the idea came before or after the installation team realized there were too many costumes in the exhibit to display them in the available space. (Renovations to the Baker Museum continue following damage during Hurricane Irma.)  Either way, I'm sure the visual aids enhanced the evening for concertgoers. And according to our docent, when de Borchgrave visited Artis-Naples, she liked the suspended costumes so much that she's considering this mode of display for future exhibits.

We learned about a serendipitous meeting between de Borchgrave and Picasso that surely made her recreation of the artists' costumes even more special. I mentioned in my earlier post that de Borchgrave's love of art developed at a young age. As the story goes, a ten year old Isabelle was vacationing with her family at the beach in the South of France. Isabelle found the sand a nice medium for her drawings. Picasso wandered by and commented favorably on her work. It's one of those things even a child would tend to remember.

Picasso created all of the costumes and the set for the Ballet Russes' Parade.  The "Chinese Conjurer" shown in this photo is a sculpture of one such costume. Unlike the sculptures in the rest of the exhibit, de Borchgrave has used copper outlines of the faces of the dancers. While a bit harder to see than a mannequin head, they are much more evocative of movement and whimsy.

De Borchgrave's artistic skill set extends beyond paper sculpting to painting on canvas and sculpting in bronze. She has not yet learned to work in copper, though, so one of the artists in her studio is tasked with this job.

Deb and I took in Fashioning Art from Paper on its last weekend at Artis-Naples. (Talk about cutting it close!)  I don't know if there's an interim stop, but if you happen to be in Atlanta this fall, the exhibit will be on display at SCAD FASH from Oct. 24 - Jan. 12. Looking to the future, our docent told us de Borchgrave is working on an exhibit based on Frida Kahlo. I can easily envision how exciting that would be.

In the meantime, if your travels take you to  Brussels, de Borchgrave's studio is open for tours. For information about that, as well as all other things de Borchgrave, click here.

A huge thanks goes out to Artis-Naples (and the other organizing museums) for bringing Fashioning Art from Paper to Southwest Florida.  It was truly a remarkable show.