An Inside Look at the Kotler-Coville Glass Pavilion 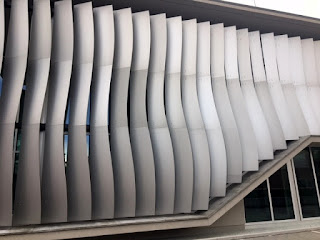 "Let's take a look at the façade of the Pavilion before we head inside," David Berry said as we started our Walk and Talk at the Kotler-Coville Glass Pavilion. I somewhat reluctantly followed the group. It was a blazing hot morning, and I was eager to learn about the art inside the building. But the architecture of the Pavilion is itself a work of art.

Berry is an Assistant Director at the Ringling Museum and was one of the project managers for the creation of the Pavilion. He explained that the Ringling Visitors Center, to which the Pavilion is attached, was built only 12 years ago. (Before that, visitors to the museum could drive directly down to Ca' d'Zan, John and Mable Ringling's home. That kind of blew my mind.) But the Visitors Center was built with an eye to function rather than design. The architects were not going to make that same mistake with the Pavilion.

The building's façade features 35 anodized aluminum fins of differing sizes. The primary purpose of the fins is, of course, to protect the artwork from the sun. But their design also mimics the effects of wind and water rippling over sand (which just happens to be the primary ingredient in glass). The surface of the fins has been treated so the light reflects off them in different ways throughout the day. The result is a sense of animation despite the fact the fins are firmly bolted in place.

With this info in hand, we moved into the new space. It is stunning. (Note that my pictures don't even begin to do the artwork justice.)

The multi-use nature of the Pavilion impacted the lay-out of the gallery. The new box office for the Historic Asolo Theatre is located at the opposite end of the Pavilion from the doors seen here. What a treat for theater patrons to see some of the studio glass on their way to collect their tickets. Theatergoers can't, however, be expected to bob and weave around the artwork in their inevitable rush to get to the performance on time.

The upshot was that the freestanding displays could not be positioned in the center of the space. Instead, they live closer to the interior wall and are partially covered by an overhang. This makes placement of the art in the glass cases--and its removal when new work goes on display--quite a delicate endeavor. The cases can't just be pulled from under the overhang for fear of the artwork toppling over. Nor can the top of the case be lifted directly up. Instead, the top must be ever so carefully raised and tilted and raised some more before it is high enough to be removed. Temple of Dreams has only a couple of inches of clearance with which to work.

Then we were on to a discussion of some of the studio glass. Berry talked about two star attractions of the current exhibit -- Rose Dress by Karen La Monte and Sideboard with Blue China by Beth Lipman. Both, he said, address the theme of identity, although in strikingly different ways.

One's clothing selections are, of course, a very visible extension of identity. So what does this dress say about its (absent) owner? While no physical being models the attire, she has a distinctive presence. Her hip is slightly cocked, her bare feet kiss the bottom of the skirt, and her nipples show through the sheer fabric. She is wearing scanty underwear. She is confident and comfortable with her body. The lightness resulting from the translucence of the dress adds a sense of calm to the scene. It is an incredibly gorgeous piece that I immediately gravitate to each time I enter the gallery.

Beth Lipman's striking Sideboard with Blue China comments on the Victorian belief that objects reflected the social and moral standing of the owner. The title of the work comes from an Oscar Wilde quote, "I find it harder and harder every day to live up to my blue china." The piece spans an entire wall of the gallery and greets visitors as they mount the stairs to the second floor. We learned the complete work has additional six foot wings on each side. (Lipman consented to the display of the work without the wings given the space constraints. She was on hand when the work was installed -- along with her young daughter, who nearly gave the staff multiple heart attacks as she ran around the gallery freely.)

Lipman's work was modeled on two historic sideboards, one by Bulkley and Hurter which was exhibited at the New York City Crystal Palace in 1853 and a second from the Houston Museum of Fine Arts from the same era. Once you get past the sheer impact of the work, you begin to notice some intriguing details.

Unlike La Monte's Rose Dress, which leaves the viewer to imagine the wearer, Lipman has quite literally incorporated the owner into her work -- albeit in a piecemeal fashion. It's hard to miss this hand due to the variation in color. But a careful study reveals that what initially appears to be a swirled design is actually intestines and that the bird atop the piece is perched on a heart. Additional body parts are liberally incorporated in the design. Yikes!  Berry said he loves to watch people's reactions as they lean in to get a closer look and realize what it is that they are admiring.

I left the gallery satisfied but in no way satiated. The exhibit includes a wide variety of studio glass, and each piece warrants study and admiration. Happily, you can make multiple visits to the gallery without breaking your budget. As a part of Ringling's Visitors Center, entrance to the Pavilion is free. Make sure to stop in the next time you take in a performance at Asolo Repertory Theatre or dine at Muse. Enjoy!