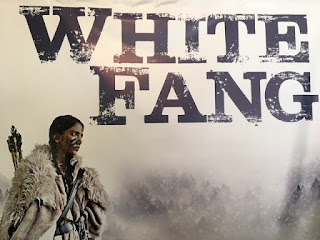 My family's not exactly the outdoorsy type. In fact, I can count on a single hand the number of family outings that involved the great outdoors. And so it shouldn't come as a surprise that Jack London's books were never on my radar screen. Yet I was eager to see freeFall Theatre's production of "White Fang" by Jethro Compton, a play inspired by London's book of the same name.

"White Fang" kicked off a season freeFall is calling "On 2nd Glance." Each show will take a fresh look at a classic. And while this concept is intriguing, what captured my attention about "White Fang" was the fact the production was a world premiere and would be heading from St. Pete to London. True, it's not going to be on the West End, but that's still not the typical order of events.

I happened upon a performance at which a pre-show talk was given by dramaturg Timothy Saunders. The talk alone was worth the price of admission.

Saunders started by giving some context for the show. London's "White Fang" was published in 1906. Melodramas were the theatrical form of the time, and Compton adopted this form for his work. The word "melodrama" calls to mind heightened--perhaps exaggerated--emotions. And while this generalization is accurate, there's more to the genre. Saunders explained that the "melo" in melodrama is short for "melody" and that music was often a component of this type of play. Each character typically had his or her signature music, a device that helped audiences connect with them. In keeping with this idea, Compton's work includes original music, with a theme for each character.

Animal melodramas were a subset of this theatrical form, with equestrian melodramas serving as the precursor to westerns. (In the 1900s, actors would ride a horse on a treadmill on the stage. How crazy is that?)  London's "White Fang" fits squarely in this tradition.

When Compton and freeFall began their work on the show, Compton didn't have a clear vision as to how White Fang the wolf would come to life on the stage. Video had been contemplated as one option. But Eric Davis, freeFall Theatre's Artistic Director, had another idea. How about a puppet? And so White Fang became embodied through a life-sized puppet worked by two actors. It was brilliant.

The opening scene featured a campfire around which some of the characters sat. Imagine my surprise and delight when the "fire" morphed into "Wee Fang." As Saunders had predicted, a collective gasp of pleasure resounded from the audience at the adorable baby wolf.

The mature White Fang was gorgeous, with actor Robert Johnston taking the lead in working the puppet. (He also played Henry Griffith.) Johnston was superb as his facial expressions and movements dovetailed with those of White Fang. To get a sense of how the puppet was manipulated, click here to see a short trailer for the show.

I also enjoyed the use of native language in the play. Periodically, Lyzbet would speak in Algonquian, a language of the Frist Nation Cree tribe. The words were a haunting reminder of the fact she's caught between two worlds. Saunders noted Lyzbet more likely would have been from the Gwich'in Tribe and spoken Athabaskan. It was too difficult, however, to find the required translations from Compton's text in Athabaskan.

If the picture of Curly above had you scanning your memory of the book for this character, don't worry that you don't recall her. Compton added her to the story to layer on a caring friendship missing from London's original. In the play notes, Compton said..."when it comes to staging a novel, there is a significant difference between a 'version,' an 'adaptation,' and an 'interpretation.' Tonight's play is surely the last of these three. The play is inspired by the themes and ideas within Jack London's novel, but finds those themes within an entirely new and original narrative. The lasting impression of London's novel was, for me, a struggle for identity. In the novel, this struggle exists within a wolf, torn between two lives and living in a world occupied by examples of the best and worst of humanity. Tonight's's play sees that struggle take shape within a human character, a character whose story is as real as the wolf's and whose story is one that I believe we should be telling and, in turn, listening to."

While "White Fang" didn't make it to my greatest hits list, there was much to commend about the production. I loved the originality of the staging, and the music and puppetry were both terrific. The costumes were great as well. (In fact, the costumes and puppets have now made their way across the pond for the London production.)

I'm looking forward to sharing in freeFall Theatre's "second glance" at more works over the course of the season, with "The Musical of Musicals -- The Musical!" being a must-see. The show will take the classic American plot of "I can't pay the rent! You must pay the rent" I'll pay the rent!" and create five interpretations in the styles of Rodgers & Hammerstein, Stephen Sondheim, Jerry Herman, Andrew Lloyd Webber and Kander & Ebb. It's going to be great fun.