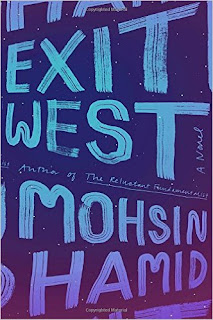 Here's a newsflash. Healthcare isn't the only political issue that's complicated. Immigration is a pretty complex topic as well and, I suspect, one that won't be resolved with the building of a wall.

Authors, of course, are often inspired by current events. In "Exit West," Mohsin Hamid envisions a magical way for refugees to escape an existence where devastation and risk confronts them at every turn. While the means by which his refugees travel is captivating, his real focus is on the stories of the people forced to leave their homes and how they adapt to their new environments.

We meet Saeed and Nadia, our protagonists, "in a city swollen by refugees but still mostly at peace, or at least not yet openly at war." They are students still trying to pretend that their lives will proceed as planned.

Hamid contemplates the instinct. "It might seem odd that in cities teetering at the edge of the abyss young people still go to class...but that is the way of things, with cities as with life, for one moment we are pottering about our errands as usual and the next we are dying, and our eternally impending ending does not put a stop to our transient beginnings and middles until the instant when it does."

Hamid has brought his readers an interesting pair in Saeed and Nadia. Saeed is a traditional Muslim who lives with his parents and prays daily. Their family home was once enviable, with its tall windows and balcony. But now, "It was the sort of view that...would be most undesirable in times of conflict, when it would be squarely in the path of heavy machine-gun and rocket fire as fighters advanced into this part of town: a view like staring down the barrel of a rifle."

Nadia is anything but traditional. While she dresses in an abaya that covers her from chin to ankles, when she leaves class she dons a motorcycle helmet and takes off on her ride. We later learn that she wears her robe not for any religious reason, but so men won't bother her. She has been irrevocably separated from her family due to her decision to venture out and live alone as an unmarried woman. The breach was "something all of them, all four, for the rest of their lives, regretted, but which none of them would ever act to repair, partly out of stubbornness, partly out of bafflement at how to go about doing so, and partly because the impending descent of their city into the abyss would come before they realized that they had lost the chance."

Over time, Saeed and Nadia come together to form a make-shift family.When they finally decide to flee their country, it is with considerable regret.

I don't want to say much more about the story, which should unfold on its own for each reader. But I will say that Hamid's writing dropped me into Saeed and Nadia's world in a way watching the news never could. Yes, Hamid writes eloquently about the pair's physical survival. But he also envisions the impact their changed circumstances have on their identities and their relationship.

"Exit West" is truly a novel of our time. Read it.