I rarely get the chance to interact with kids. In fact, living in Punta Gorda, I hardly ever even SEE children. And so when I read that Sarasota County's Embracing Our Differences program was seeking volunteers to read a Dr. Seuss book to an elementary school class, I signed up. It was a wonderful experience. I was assigned to read Dr. Seuss' The Lorax to Rebecca Shipley's third grade class at Glenellen Elementary School in North Port. We were encouraged to practice reading the book out loud a few times. I dutifully checked The Lorax out from the library. I was a bit surprised to find that it was 32 pages long. I was also struck by how political the book is.

In case it's been a while since you read The Lorax, it tells the story of the Once-ler, a man who decides to cut down a single Truffala Tree to knit a thneed. A passerby offers to buy the thneed. Before long, a factory's been built, the trees are being cut down four at a time, and the animals have headed off to friendlier climes. Eventually, all that's left is a landscape of stumps. Even the Lorax, who speaks for the trees, has departed, leaving behind a pile of rocks with the word "Unless." The Once-ler is baffled by the meaning, until a child shows up. "Now that you're here," the Once-ler says, "the word of the Lorax seems perfectly clear/UNLESS someone like you/cares a whole awful lot/nothing is going to get better/It's not." And, with that, the Once-ler throws the child the sole remaining Truffala Seed. Maybe, with time, the trees and animals will come back.

Theodor Geisel (aka Dr. Seuss) wrote the book in the early 1970s at the start of the environmental movement. Forty-some years later, the message seems particularly timely given the White House's desire to gut the EPA. But I digress. 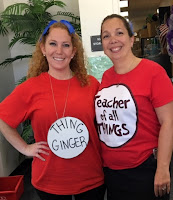 Walking to the school office to check in, I saw people dressed up like Dr. Seuss characters, with crazy socks and striped hats a la Cat in the Hat and "Thing 1" and "Thing 2" signs hanging around their necks. In keeping with the theme, I was given a bag of goldfish to sustain me. (Get it? One Fish, Two Fish, Red Fish, Blue Fish.).

I was greeted warmly when I got to the classroom. Remember how desks used to be set up in nice straight rows all facing the teacher?  Well, no longer. The kids were seated three to a circular desk equipped with laptops and headphones.  I would have loved to have seen how classes work in this environment, but I had a job to do. 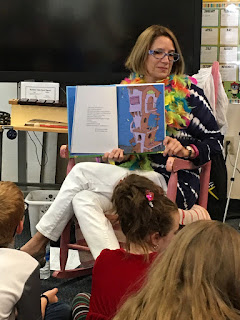 Becky invited me to sit in a rocking chair at the front of the class and, if I liked, to put on the colorful boa awaiting me. The kids settled in on the rug at my feet. After I established how old they were (eight or nine) and explained that I might need their help because I was new to this, we were off.

Not surprisingly, it wasn't a straight read-through. I had mentioned Seuss' nonsense words at the beginning, and at one point a boy noted--quite correctly--that "biggered" wasn't a word.  We discussed how the kids were able to understand what it--and other made-up words like "Grickle-grass" and "Whisper-ma-phone"--meant, though, given the context.

At one point someone referenced a scene in The Lorax movie, and the kids started giggling. "Is that funny?"  I asked. I was assured that, indeed, it was quite funny, but that I couldn't be expected to understand why since it was kid humor.

The best part, though, was the circle discussion after I was done with the book. The kids organized themselves, and Becky handed over a pencil that looked a bit like a Truffala Tree to the first child. Only the student with the "tree" was allowed to talk. 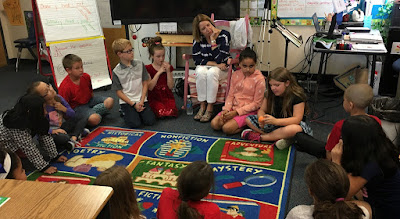 We had touched on the fact Dr. Seuss books are fun but also have great messages. Some of the kids picked up on that, with one boy saying how "inspiring" he found Dr. Seuss. Someone mentioned how bad corporate greed was. Not all the comments were so serious though, as a number of the kids just liked how the Truffala Trees looked. (They are pretty cool.)

One little girl earnestly commented how the book reminded her of the movie "Wally" (in which, apparently, people also wrecked the world). I was impressed by the analogy.

Way too quickly, the hour was over. The kids applauded and a couple gave me big hugs. It was a terrific afternoon.

Note: Embracing Our Differences is a non-profit organization whose mission is "to use the power of art and education to expand consciousness and open the heart to celebrate the diversity of the human family." While it is not a part of Read Across America, it has joined with the fun of celebrating Dr. Seuss' birthday for the past four years with reading events in Sarasota and Manatee Counties.

Brenna Wilhm, Education Director, talked with me about how Dr. Seuss' books fit with Embracing Our Differences' work with diversity and inclusion. "Cat in the Hat," for instance, provides an opportunity to discuss standing up to bullies. "Horton Hears A Who" explains the importance of listening to a cry for help. And "Green Eggs and Ham" shows that you have to look beyond superficial differences.
Next up for the program is an art exhibit in Bayfront Park in Sarasota that will run from April 1-May 31. Students from around the world submitted artwork and quotes interpreting the theme "enriching our lives through diversity." From the more than 10,000 submissions, 48 pieces of artwork and 46 quotes will be featured. Stay tuned for more on that.

To read more about Embracing Our Differences, click here.