It's not often that you hear people laughing in the Ringling Museum's galleries. After all, the collection of works by Old Masters invites contemplation rather than mirth. And dancing?  Forget about it!  But the galleries were filled with both when Morgan Szymanski led a talk focusing on parallel themes in the music of Beyoncé and artwork in the Museum.

The talk was part of the Student Spotlight series led by Ringling Education Interns. The program gives interns both a fuller museum experience and a chance to hone their public speaking skills. And it gives Ringling patrons the chance to look at the collection through a different lens.

When it came time for Morgan to put together her presentation, she was a bit stumped. Maureen Zaremba, head of Adult Programs, asked Morgan what she loved (besides art). Beyoncé was her response. And so Morgan took the themes from four of Beyoncé's top songs and headed to the galleries to find corresponding artwork.

The first pairing was "Halo" by Beyoncé and "Roman Courtship" by William Ernest Reynolds-Stephens.As we gathered in front of the painting, Morgan told us each combo also had its own power move for us to execute. Cue the nervous laughter. We started off by learning the "fist pump for fate," which involved putting your arm in the air, clenching your fist, and pulling it down while moving your hips a little bit.

Once we'd perfected the move, Morgan told us "Halo" is about putting faith and love and trust in your significant other. The couple in "Roman Courtship" are asking the gods to accept their love. Cupid hovers over them to urge them on and a garland of roses lies at their feet. Sadly, Atropos is also on the scene.  She's the fate responsible for determining a person's lifespan and is readying herself to cut the string of life to one of the pair. So there's no happy ending despite the couple's abiding love. 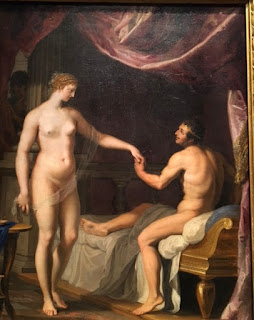 From there we moved on to "King Candaules Shows Gyges His Wife Queen Nyssia" by Jacques Stella and Beyoncé's "Irreplaceable," a song about taking your loved one for granted and being unfaithful.  Our power move was the "unfaithful thumb" (which had to do with moving hubby to the left and kicking him out).

When you take a close look at this painting, you'll see a peeping tom over Queen Nyssia's shoulder. What makes it creepier than your run-of-the-mill voyeur is that he's there at the King's invitation. The tale comes from "The Histories" of Herodotus. Candaules was apparently so taken by his wife's beauty that he wanted to share it with his servant Gyges. But when Nyssia found out, she didn't take it as the compliment intended. She gave Gyges two choices: either she would kill him or he would kill the King for taking her for granted. It wasn't a difficult decision. Nyssia and Gyges eventually married.  I don't know if they lived happily ever after. But I bet he didn't assume he was irreplaceable. 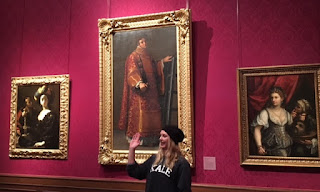 Two paintings of "Judith with the Head of Holofernes" by Francesco del Cairo and Fede Galizia, respectively, were up next. The song was "Single Ladies" with its lyrics praising the single life and urging women to be proud of who they are. The move was the "single lady slap," which was kind of like the royal wave.

If you're not familiar with the story from the Book of Judith, the Assyrian general Halofernes took over Bethunia. Judith was keen to save her town. But how?  Luckily, Halofernes had the hots for Judith. He invited her into his tent for a romp. After he passed out from drinking too much wine, she beheaded him. The town is saved. Judith is proud.  Beyoncé surely would be too. 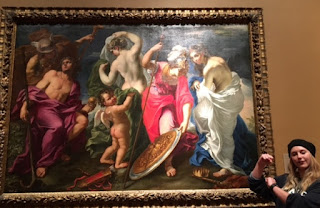 Last up was "The Judgement of Paris" by Lodovico David and "Crazy in Love," a pairing which cried out for the "crazy roll" power move. "Crazy in Love" is a song about being so in love you act out of character. There's a lot of craziness in this painting, as each of Aphrodite, Hera and Athena work to get the shepherd Paris to declare her the fairest of the three. Paris was unable to make a decision while the goddesses were clothed, so they stripped to give him a clearer choice.  After much consideration of the goddesses' appearances and enticements, Paris chose Aphrodite. After all, she had promised him the world's most beautiful woman.  In his eyes, this was Helen of Troy.  The pair got together and the Trojan War ensued.  Once again, not exactly a happy ending.

After putting all of our power moves together for a quick dance, our tour was over.  While the connections between the songs and the paintings were a bit of stretch, I appreciated the creative approach. Besides, it was just plain fun. I left with the realization that I should take the time to learn the stories behind the artwork in the Ringling's collection. While this era of art isn't really my thing, it can be pretty captivating when you know what's going on.  Kudos to Morgan and the Ringling's Education Program for helping me see these works in a new light.