Behind the Scenes at Florida Studio Theatre: Outside Mullingar, Part 1 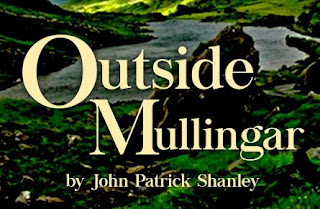 Florida Studio Theatre puts on four main stage productions each season. Its Behind the Scenes program allows students to follow a play from the first read-through by the actors through dress rehearsal, with a concept and context session at the beginning and a panel discussion with the actors and stage manager at the end. How could I resist? All I needed was time in my schedule and plenty of gas. (Guess which one was harder to come by.)

I registered for the class for "Outside Mullingar" by John Patrick Shanley. The first session was last week, and I love it already. The class is facilitated by Jason Cannon and Christine Hopkins. Jason is an actor on FST's artistic staff. (FST followers might remember him from last year's "Dancing Lessons.") Christine is FST's director of education.

The excitement in the room was palpable as we settled into our seats in the theater. With the set for "Butler" as their backdrop, Jason and Christine gave an intro to the program (an explanation unnecessary for the many self-proclaimed Behind the Scenes addicts in the class).

Jason posited that, "As you learn more about something, it becomes less magical, but you appreciate it more." The objective of the program is to help the audience develop "more informed eyes and ears," he continued. As the audience becomes more discerning, the theater has to perform to a higher level. FST clearly welcomes this challenge.

We covered a lot of ground and were joined at different points by director Kate Alexander and production manager Bruce Price. Here are some of the highlights:

--FST has an interesting approach to casting its shows. Its rule of thumb is for 25% of the cast of each show to be returning FST actors. FST likes its actors to be comfortable with the theater's culture and audiences and encourages the veteran actors to mentor the newbies. FST always holds local auditions, but frequently casts out of New York.

--The literary team reads approximately 500 plays each year. The team maintains a list of 10-20 hot plays as possible productions. Sometimes a show is put in a reading circle or new play festival before a decision is made about a full-scale production. Even if a play is fast-tracked, it takes 18-24 months to get from discovery to opening night.

--Royalties for a play are based on a number of factors, including size of the house, ticket prices and profit/non-profit status.

--"Outside Mullingar" was commissioned by Manhattan Theatre Club in New York and premiered in 2014. John Patrick Shanley, perhaps best known as the author of "Doubt," is of Irish heritage and took the occasion of his 60th birthday to write a show about the family farm. The play tells the story of two neighboring families in a town outside Mullingar, Ireland and received Tony Award, Outer Critics Circle Award and Drama Desk Award nominations for Best Play (or the equivalent thereof).

--Kate Alexander shared how she will encourage her actors to approach the play when they arrive next week. Irish playwrights, she said, "embrace the cult of death." They don't tiptoe around the subject or take it too seriously. Instead, their approach is more, "We're going to die soon.  Let's have a pint." It's a very different tack than that of David Mamet or Edward Albee on the subject.

--Bruce Price talked about some of the challenges, both financial and technical, of putting on the show. As soon as he read the script and saw that it called for rain (the play is set in Ireland, after all), dollar signs started dancing through his head. While the details aren't totally pinned down, he expects there will be combination of real water and water images projected on a screen. The rigging for rain involves running a garden hose into the roof of the house into a PVC pipe and a trough into which the fallen rain will flow.

--Scenic designers Moriah and Isabel Curley-Clay had originally proposed a turntable set for the production. Bruce sent them back to the drawing board due to concerns about the turntable malfunctioning, a particular issue with floors like those of FST's historic Gompertz Theatre that aren't totally level. The revised design calls for different components of the set to be on rolling units.

--Sketches of the set design were passed around so we could get a sense of what the characters' homes will look like. The detail was truly amazing, down to movable panels for the roof so that the lines of the two homes can differ.

By the time the class was over, my head was buzzing with all the information that had been shared. I left FST eagerly anticipating the next class when we will sit in on the actors' first read-through of the play. I didn't even mind getting a homework assignment -- reading the script of "Outside Mullingar."  Stay tuned!