Dickens at the Powel Crosley Estate

The holidays are always a bit frantic, as we run from party to party while trying to take care of our regular lives and finish up our shopping. It can be hard to get into the spirit of the season.  "Dickens at the Crosley" is a terrific way to do just that.

The Powel Crosley Estate is a mansion just north of The Ringling. You can imagine how grand it was in the day, with its large patio and balconies overlooking Sarasota Bay.  (You can also imagine how overshadowed it was by John and Mabel Ringling's Ca d'Zan just up the road.)

Crosley made his money in a wide variety of businesses. In 1916 he started a mail-order marketing business of auto accessories to car owners. He manufactured phonographs and radios and refrigerators. He owned the Cincinnati Reds and a radio station that aired "continuing day time drama" to keep listeners tuned in. 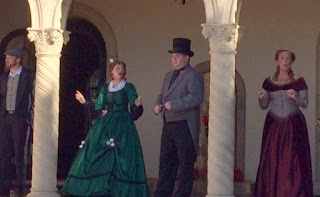 Powel built "Seagate" in 1929 for his wife Gwendolyn. Powel and Gwendolyn were our hosts for the afternoon and shared their responsibilities with friends and family.  We were greeted on the back patio (giving the audience an opportunity to appreciate the vista) with introductions and some carols.

The format of the afternoon was explained. Four performances would be given, and we would have the chance to enjoy three of them.  We would all hear Powel and Gwendolyn's interpretation of Dickens' "A Christmas Carol" in the Great Room. From there (after time to grab some wine or wassail from the bar), we would head to the Library for cousin Betsy Trotwood's telling of Clement C. Moore's "A Visit from St. Nicholas" and Oscar Wilde's "The Selfish Giant."  Then the audience had to make a decision about which story to sit in on in one of the upstairs rooms -- James M. Barrie's "The Real Peter Pan" or Dickens' "Christmas Dinner with the Crachits" and Willa Cather's "The Burglar's Christmas."  Whew! 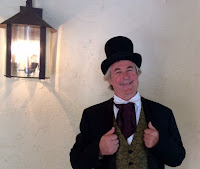 Eileen Earnest as Gwendolyn and Christopher Voeller as Powel gave a wonderful rendition of "A Christmas Carol," with Gwendolyn playing the parts of the ghosts and Powel as Scrooge. The audience got in on the act, including a little boy conscripted into playing nephew Fred (his put-upon facial expressions were priceless) and a big burly African-American man being tapped as Tiny Tim. (The "ghost" remarked that he was a bit like an "adult jungle gym.")  I loved the feeling that you were in someone's home as they acted out the play as a parlor game of sorts.  And, I have to admit, the story kind of got to me.

Our time with Vanessa Webb in the role of Betsy was feel-good from start to finish. Oscar Wilde is not known for his child-appropriate stories. But "The Selfish Giant," with its tale of a giant who walls up his garden to keep children from playing there, was specifically written to be read to young listeners.  It's a wonderful story that, while not Christmas-themed, definitely has the spirit of the holidays in it.  And Betsy's version of "A Visit from St. Nicholas" (which starts, of course, "'Twas the night before Christmas....") was great fun, with audience members making reindeer noises and crying out at appropriate parts. 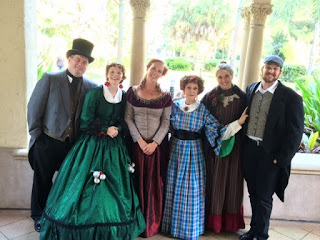 From there I headed upstairs into the Bayside Room to catch Ann Morrison/Aunt Great Aunt Victoria's "The Real Peter Pan." Ann developed this play from Barrie's "The Little White Bird/Adventures in Kensington Gardens."  It tells the story of Peter's meeting with Maimie, a little girl who sneaks out to Kensington Gardens in hopes of meeting Peter and the fairies who live there and gets locked in for the night. (Maimie becomes Wendy Darling in the later books.)  Ann swooped around the room using wonderful voices to portray the different characters, and I found myself swept up in the story.

All good things must come to an end, and the audience was then led back out to the patio for good-byes and a few more carols.  It was a lovely way to spend an afternoon.  The show is running through Dec. 20, so there's still time to get there. And if you miss it, "Shakespeare at the Crosley" is coming in January.  (Click here for information.)