Anyone who loves to read knows how addictive a good book can be. You find yourself squeezing out 15 minutes here and there to read "just one more chapter." (Really, does that volunteer work have to be done right now?)  Here are some books that have recently stolen my time. 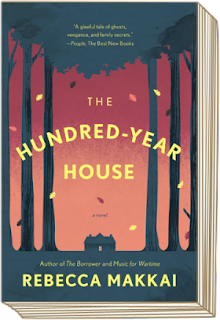 The Hundred Year House by Rebecca Makkai --  Told in reverse order, Makkai takes us through four generations of a family home and its residents (including the artists living on the estate during its tenure as an art colony). It's a ghost story of sorts, with the spirit of the original matriarch of the house lurking in the background to be called up when anything odd occurs. But it's much more a story about the secrets people keep and their consequences. Makkai's writing propels the story, well, backwards with language that had me reaching for my post-it flags. (Take, for instance, when one character breaks into the main house. "Doug's back had been turned on the hallway for a long time, as if he'd never watched a spy movie in his life....Now that he'd become aware...of the fact that he couldn't turn his head like an owl, he was uncomfortable whichever way he faced.")  I loved the discovery of the unexpected stories behind the people and key objects introduced in the earlier portions of the book. (Would that be reverse literary bread crumbs?) "The Hundred Year House" starts off strong and picks up steam from there.  I'm looking forward to reading more by this young author. 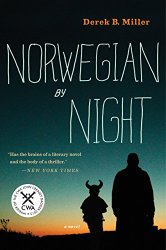 Norwegian by Night by Derek B. Miller -- I grew up reading Nancy Drew, and I love a good thriller to this day. But as my horizons expanded to literary fiction, I've found it more difficult to find thrillers that satisfy my quest for good writing and a compelling plot. "Norwegian by Night" hits both marks. (In fact, the NY Times says it has "the brains of a literary novel and the body of a thriller.") The book tells the story of Sheldon Horowitz, a widower who has been transplanted from New York to Oslo to live with his granddaughter Rhea and her husband Lars. It is a tough adjustment for Sheldon, made more so by the fact that Rhea and Lars believe he is suffering from dementia.  And while he does have a few delusions, Sheldon's eccentric behavior is driven more by the fact that he is haunted by the past -- most significantly, his son who died in the Viet Nam War while trying to make his father proud and his own secret past as a Marine sniper in North Korea -- than by dementia. When violence erupts in the family's apartment building, Sheldon almost inadvertently gets involved and becomes the caretaker of a young boy whose mother has just been murdered. The book tells the story of the pair's journey (both physical and emotional) as Sheldon tries to keep the child out of harm's way.  For Mark Twain fans, there are references throughout to "Huckleberry Finn."  In addition, Sheldon's identity as a Jew is an important facet of his personality. While I didn't fully appreciate either of these aspects of the narrative, they add to the depth of the story. "Norwegian by Night" is a great read for fans of the genre. 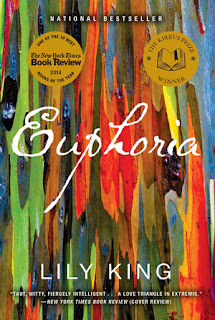 Euphoria by Lily King.  This book has gotten so much press that I suspect I'm not sharing a literary find. But I'm chiming in nonetheless. "Euphoria" was inspired by the time Margaret Mead, Reo Fortune and Gregory Bateson spent together in 1933 on the Sepik River in New Guinea. Although the events and tribes described are fictional, King has incorporated details from the work that Mead et al did while in the region. (To hear King talk about her inspiration and see some great pictures of Mead and her tribes, click here.) Mead/Nell's research was focused on whether gender differences are innate or cultural, with her research coming down definitively on the side of culture. (Click here to read a bit about Mead's work.)  While it was fascinating to read about the various tribal cultures, the relationships among the anthropologists and their differing approaches to their work interested me even more. The story is told primarily from the perspective of Bankson/Bateson, although it starts with -- and periodically shifts to -- Mead/Nell's view. I found this device a bit confusing, especially at the beginning of the book. Ultimately, though, it added to the narrative. "Euphoria" is a great book for anyone with an interest in human relationships.