I spent the last week in September at my sister's taking care of Drew, my 13 year old nephew, and Jakie, my four year old nephew dog, while Suzanne and Tim were off on a business boondoggle in St. Tropez.  It was a surprisingly easy and fun week, but for Drew's excruciatingly long flag football game and Jakie's gag-inducing incident.

I headed back to my sister's last week-end for a responsibility-free and fun-filled couple of days.  On Friday night we headed to the Cine-bowl and Grille in Delray Beach.  (It always pays to keep an eye on those Groupon offerings -- Suzanne scored an hour of bowling for four with shoe rental, a large pizza and a pitcher of beer for $40.)

I'll preface this by saying that I am not known in my family as an athlete (and for good reason). Nonetheless, I had visions of breaking 100 on my first bowling outing in many years.  My dreams were dashed when my first four balls ended up in the gutter about halfway down the lane.  Drew kindly suggested that we might put the kiddie bumpers up when it was my turn.  I began eyeing the slide-looking devices the little children in the next lane were using to get their balls going in a straight--if painfully slow--path to the pins.  I lowered my hopes to achieving a double digit score.  I gave up taking a few steps before releasing my ball, sacrificing speed in hopes of a bit more precision.  Despite my absolute and total lack of success, it was great fun with music blaring and videos streaming and copious amounts of unhealthy food being consumed.

I would be remiss if I didn't mention that Suzanne got on an incredible hot streak in the second game.  She rolled two strikes in a row, then a spare, and had scored 121 with a frame or two to go before our time ran out. The boys had headed to the arcade and missed her performance, but Tim and I watched in awe.  Perhaps there's still time for her to join a senior league and get a shirt with her name embroidered across the pocket. 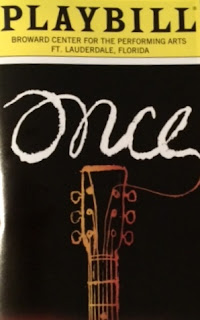 Saturday night found us at the Broward Center for Performing Arts for a performance of "Once."  The show won eight Tony Awards in 2012, including Best Musical, so I was happy to be able to tag along with Suzanne and Tim for the performance.

Before the show began, audience members were invited onstage to check out the set (which was an old mirrored bar) and buy a drink.  Needless to say, I was all over that.  As a bonus, some of the actors came onstage, instruments in hand, and began to play just as I was climbing the steps.  There were fiddlers and a mandolin player, a pianist and an accordionist.  One guy played the tambourine with his foot while strumming a guitar.  The music made me think of gypsies, and the crowd really got into it.  The actors continued playing as the audience members were ushered to their seats, with the music flowing seamlessly into the first song of the show.  Seriously fun.

The story of the play is nothing remarkable -- a disheartened Irish musician whose songs celebrate his lost love meets a woman who encourages and inspires. But I loved the music, and Stuart Ward and Dani de Waal were wonderful in their roles as "Guy" and "Girl."  The choreography was simple, yet beautiful. I especially liked the way the actors were situated so the audience could see their reflections in the various mirrors.  And in a flashback to my work with students learning English as a second language, I laughed as the Czech immigrants worked on their English by watching--and arguing about--their favorite soap opera.  All in all, a highly enjoyable way to spend the evening.
at October 19, 2015