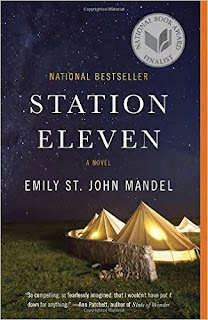 The "Hunger Game" series aside, I'm not much for dystopian novels. Why thrust myself into such a world when the worries of day-to-day life are quite enough?  Emily St. John Mandel's "Station Eleven" has been on my "to read" list, though, since I first heard about it at the 2014 BEA Editors' Buzz Panel. Once I started reading, the book grabbed me and didn't let me go until I had reached the last page.

The story begins with the onstage death of a Shakespearean actor during a production of "King Lear."  And while that's sad, the tragedy lurking in the wings is much worse.  A pandemic is sweeping the globe, and within weeks the vast majority of the world's population will be dead.  For those who survive, civilization reverts to a world without electricity or gasoline or phones or the internet.  One of the book's early chapters is "an incomplete list" of memories of a former world:  "No more diving into pools of cholorinated water lit green from below.  No more ballgames played out under floodlights...No more pharmaceuticals. No more certainty of surviving a scratch on one's hand...No more flight.... no more requests to put your tray table in its upright and locked position... No more social media...No more reading and commenting on the lives of others, and in so doing, feeling slightly less alone in the room..."

We join our characters in Year Twenty. (Time is now marked in post-collapse years.) Mandel describes what's happened in this way:  "There was the flu that exploded like a neutron bomb over the surface of the earth and the shock of the collapse that followed, the first unspeakable years when everyone was traveling, before everyone caught on that there was no place they could walk to where life continued as it had before and settled wherever they could, clustered close together for safety in truck stops and former restaurants and old motels."

But there's one group that continues to wander -- the Traveling Symphony.  The musicians and actors crossed paths in Year Three and now journey from settlement to settlement, bringing Shakespeare and music to the world.  The reason for their travels is simple: "Because survival is insufficient." (And yes, this is a quote from Star Trek if there are any Trekkies out there. This is just one way Mandel tips her hat to the many forms art and culture can take.)  While the Traveling Symphony represents the importance of the arts in our lives, its travels are also a clever way to show us how different people live in the post-apocalyptic world.

The book takes readers between the past and the present, with a focus on the Shakespearean actor who dies at the beginning of the story and the people in his orbit. I found myself equally engrossed in the stories of today's world where paparazzi stake out stage doors and the envisioned future where every stranger is a potential source of danger.

There's much to talk about in "Station Eleven," which Emily St. John Mandel calls "a love story to the extraordinary world in which we live." (Click here to read an interview with the author.)  For readers in our area, Copperfish Books' book group will discuss this 2014 National Book Award Fiction Finalist on August 13th.   Regardless of whether you are a solo reader or part of a group, "Station Eleven" is a book worth seeking out.