I have no doubt that I will always be a reader of physical books.  (Yes, the ones you inconveniently have to schlep around with actual pages you turn.)  While I admittedly haven't tried very hard, I just can't make the transition to my Kindle.  Among other things, how do you figure out what you want to read without going into a bookstore or library and trolling the shelves?  And why would you deny yourself that pleasure?

Having said that, I have become addicted to my subscription to Audible, with a credit each month for an audio book.  Picking an audio book can seem an even more daunting task than finding a read for your Kindle, since a good book will lose its appeal without a narrator whose style speaks to you.  For me, Will Patton is just such a narrator.

I discovered Patton when I listened to Stephen King's "Doctor Sleep," a satisfyingly creepy sequel to "The Shining."  I just loved his voice, and his pacing was terrific.  And so, just as when you find an author whose work you enjoy, I started looking at audio books for which Patton is the narrator.  I feel like a miner who's struck gold.   Patton has won several narration awards--primarily for mysteries and thrillers--and is perhaps best known as the voice of James Lee Burke's character Dave Robicheaux. I've been meaning to give Burke's books a try and now have the perfect way to do so. 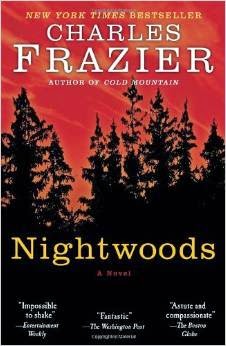 What's prompted this post, though, is that I just finished listening to Charles Frazier's "Nightwoods."  My thoughts keep returning to this story brought to life by Patton's voice.

The book begins with a simple, intriguing sentence.  "Luce's new stranger children were small and beautiful and violent."  And so I was launched into the world of Luce, a woman whose solitary life in the Applachians is irrevocably changed with the arrival of her murdered sister's twin children.

"Nightwoods" is a dark story about a damaged family. The children speak only in the silent language of communication between twins.  Luce's relationship with the children is tentative at best.  Her instincts on how to deal with them are good, though, and each inroad she makes feels like a great victory.

Luce's relationship with the outside world is tentative as well.  She tends to an old lodge outside of town and lives more or less off the grid.  When asked about whether her life is lonely, she acknowledges that it is, but feels passionate about its many rewards.  Among them, "Birds passing over in waves, their calls singing of distance and other landscapes...The sadness and bravery of new doomed sprouts growing from dead blighted chestnut trees. At night, you could walk outside and...not see a light, just shapes of black mountains against the charcoal sky and the brilliant stars overhead."  Frazier's words are often lyrical and bring beauty to a world quite unlike my own.

When the owner of the lodge dies, his grandson enters the picture.  Young Stubblefield spent summers in the area and remembers Luce.  Her beauty has lingered with him for more than a decade, and he's eager to get to know her.  Their friendship becomes an important part of the story.

I don't want to say more as "Nightwoods" is definitely worth reading or, better yet, listening to.  One of the wonderful things about reading is conjuring up images of the story as you go.  Patton's narration made the images richer and the characters a bit more real.  In an interview about his audio work, Patton said, "When I read a book aloud, I get to know the author.  I get to know where he was emotionally."  Patton's respect and enjoyment of Frazier's words are clear, and the result is a wonderful partnership between author and narrator.

In case the name Will Patton (or his picture) seems familiar to you, there is a reason.  In addition to narrating audio books, Patton is an actor on stage and screen.  He's won two Obie awards (one for Sam Shepard's "Fool for Love") and has acted in movies and TV shows as varied as "Desperately Seeking Susan" to "Remember the Titans" to "24" and "Numb3rs." More recently, he appeared in the movie "November Man" and the still running television show "Falling Skies."  With his resume, I'm curious about how he got into the business of reading audio books.  But mine is not to ask, just to enjoy.