Ai Weiwei: According to What? at the Brooklyn Museum of Art

No trip to New York is complete without a visit to at least one museum.  And so my friend Andrea and I spent some time last Sunday at the Brooklyn Museum of Art to see a terrific exhibit about art during the Civil Rights Movement.  (More on this show later.) Building on this theme, the Museum's other exhibits also relate to social activism.   One of the shows is "Ai Weiwei:  According to What?"  We weren't familiar with Ai Weiwei's work, but decided to check it out.

Ai Weiwei is a contemporary Chinese artist who works in a variety of mediums -- photography, sculpture, architecture--while focusing on issues of freedom of expression and civil rights. He uses social media extensively in his efforts to raise awareness about societal issues and promote activism.  (His blog was shut down by the government, so he now uses Twitter as a primary means of communication.)  As a result of his political activism, Ai was imprisoned in 2011 for 81 days.  His passport was revoked, so he can no longer leave the country.  His artwork, however, still finds an audience in the world outside of China. 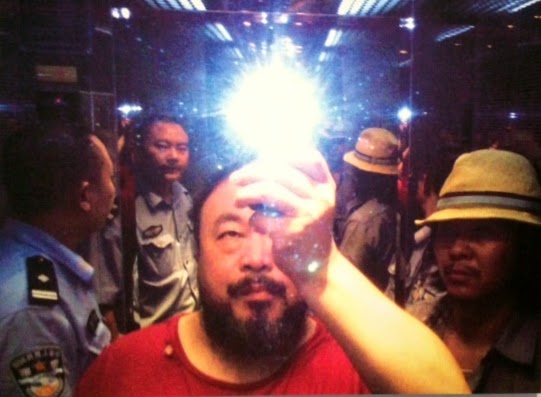 The exhibit contains a number of pictures and installation exhibits whose meaning isn't apparent unless you read the descriptions. Take, for instance, this photograph.  In 2009, Ai Weiwei was taken into police custody to prevent him from testifying at the trial of Tan Zuoren, a fellow activist.  (Among other "crimes," Zuoren was investigating substandard construction that caused schools to collapse during the Sichuan earthquake. More than 70,000 people died as a result of the earthquake, including 5300 students who were trapped when schools crumbled around them.) Ai took this picture of himself in custody and posted it on Twitter.  During the confrontation, the police struck him on the head, causing a brain hemorrhage. A few days later, he had to have emergency brain surgery.  The exhibit also contains pictures of his brain MRI (called "Brain Inflation"). 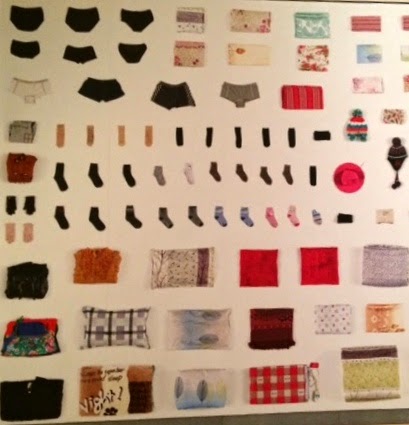 In one room of the exhibit we found a pile of boxes and suitcases. A scooter and a bike were situated off to one side. The wallpaper had pictures of items of clothing, CDs, and kitchen gadgets. The installation is called "Ye Haiayn's Belongings, 2013."  Ye Haiyan is a Chinese AIDS awareness activist.  As a result of her politics, she and her family have been evicted on numerous occasions.  In one instance, the secret police forced them to pack their belongings and then drove them out of town, dumping them and their possessions on the side of the road with a warning not to return.  Ai became involved with the family, providing shelter for them in Beijing, and the images in this exhibit are some of their 2872 possessions that Weiwei catalogued. 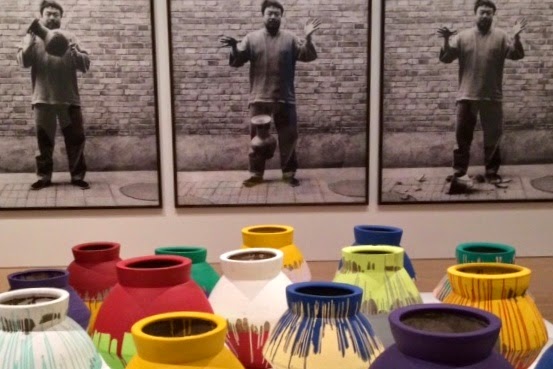 Then there was the room relating to Han Dynasty Urns.  A trio of pictures shows Ai purposefully dropping a 2000 year old Han Dynasty Urn.  His intent was to visually break with Chinese cultural traditions and legacies.  In the foreground are a number of Han Dynasty Urns that have been dipped in industrial paint. According to the explanation, by doing this, Ai "asks viewers to consider questions of authenticity and the value and meaning of an original artwork."  I found this room the most shocking of the exhibit. 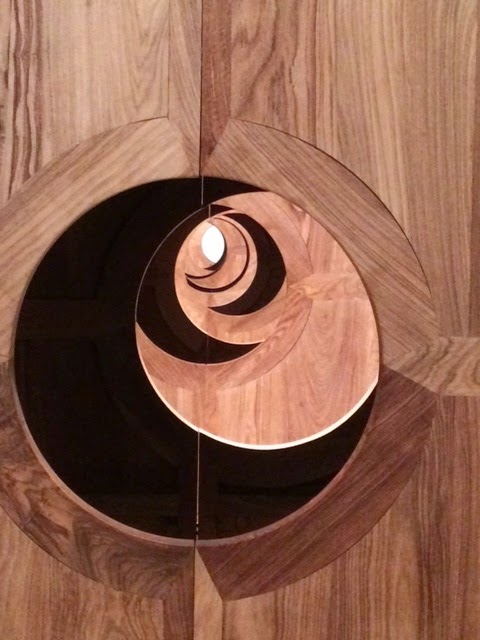 The room containing the "Moon Chest" was a respite from the intensity of the rest of the exhibit.  This installation was part of a series of 81 chests that Ai carved from the wood of Chinese quince trees.  Each chest has four circular openings, and when you look through the openings, you see different phases of the moon.  It was a beautiful installation, and viewers were having a lot of fun taking pictures of each other peering through the opening in the furthermost chest.

In an unexpected link to the Book Expo, one of the galleys I picked up is Sarah Thornton's 33 Artists in 3 Acts.   Thornton was the chief writer in contemporary art for The Economist and takes an interesting look at the work of 33 contemporary artists in her book, with Act I being "Politics."  Ai Weiwei is front and center in this section.

While doing her research for the book, Thornton attended a conference on "Designing China" at which Ai Weiwei spoke.  It happened to take place in the week between his confrontation with police described above and his emergency brain surgery.  A giant welt was visible on the side of his head.  The moderator introduced Ai Weiwei by saying, "Weiwei was a consultant on the Bird's Nest Stadium for the Beijing Olympics and has built an artistic compound in Caochangdi, an area near Beijing where he welcomes his friends and sometimes the police."

I am glad that Andrea and I didn't skip "Ai Weiwei: According to What?" as the work of an unfamiliar artist.  I left the exhibit feeling fortunate to live in a place where social activism is protected as free speech.  I also left with a newfound respect for the ways in which artists like Ai Weiwei can raise awareness about social issues through their art.

The exhibit runs through August 10th.  If you're in the New York area between now and then, I encourage you to take the time to check it out.