Symphony at an Exhibition, Part 3

Barbara Albin was next up at our session at FGCU.   I have admired Barbara's work for some time, and on more than one occasion have been tempted to bring one of her paintings home with me.  (It hasn't happened yet, but I suspect it's just a matter of time.)

Barbara was assigned the Eighth Movement from Pictures at an Exhibition-- the Catacombs.  The painting that inspired this movement -- Hartmann's Paris Catacombs-- is my favorite of the surviving works.  I like the atmospherics, and it reminds me of a Jack the Ripper walking tour my friend Andrea and I took on a trip to London.  (I know -- creepy.  And all my idea.)

Never having been to the catacombs, Barbara searched for some kind of parallel from her own life to draw on when creating her work.  Her son lives in New York City, and she visited him not too long ago. She had to take the subway while there, an experience that was a bit daunting for this small town girl from Northern Illinois.   Little did she know that her time underground would provide later creative inspiration.

Barbara began thinking about an image of a subway tunnel for her work.  She did some research, and learned that there are a number of abandoned NYC subway stations.  Some of the stations are beautiful, with tiles and skylights and even chandeliers.   The City Hall station shown here was built in 1904 and closed in 1945.  (There was apparently a one night event when people could tour the station, and this picture was taken then by photographer Fred Guenther.  Wouldn't that be a fun outing???)

Barbara started on her painting, but she wasn't really happy with it.  She considers herself a glass half full kind of person, and didn't like the dark palette.  (She said it's probably been ten years since she has used brown in a painting.)  She set her canvas aside and began to work on an alternative that took an entirely different approach.  She found herself drawn back to the concept of the subway, though.  If she could just figure out how to make it work.

Barbara realized that what was missing from her painting was the sense of hope she felt when she listened to Mussorgsky's music.  She thought back to her Catholic upbringing and churches filled with icons laden with gold.  From there she went back to the abandoned subways, which felt sacred to her in some way. 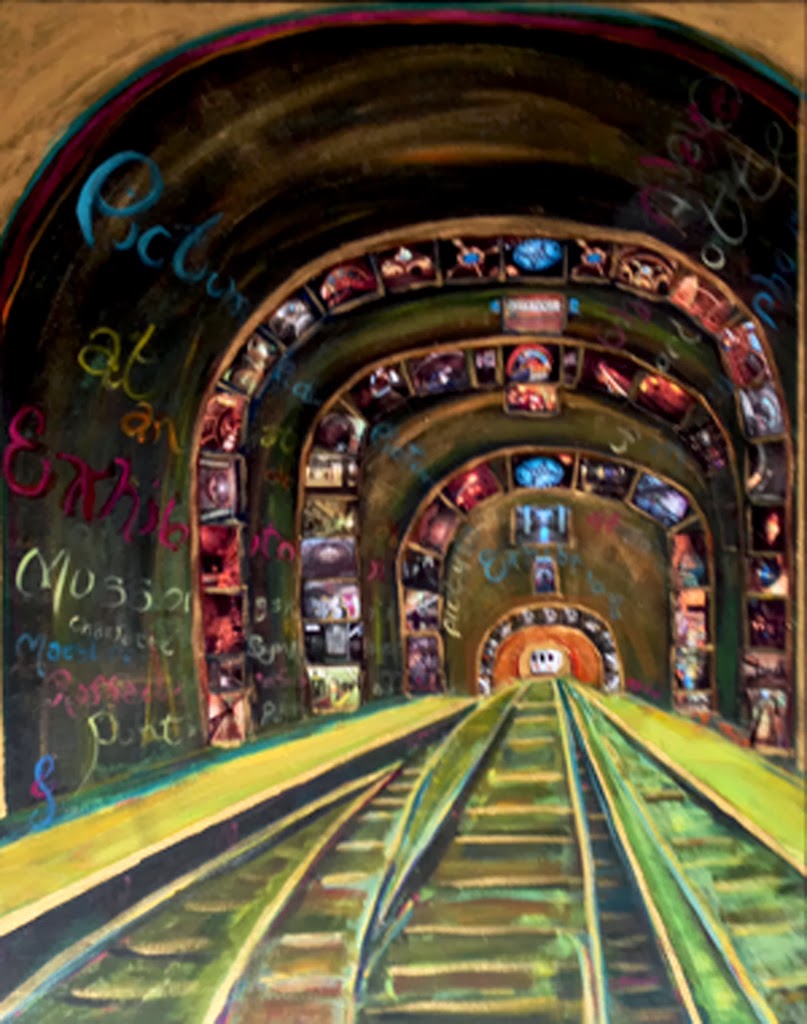 Sacred Subway is the result of this creative process.  Barbara retained the subway tunnel, but added color and light in the form of images from the abandoned stations.  These images--which she calls her "icons"--are layered on in this multi-media work.  And what's a subway without some graffiti?  If you look carefully, you will see that the words read "Pictures at an Exhibition -- Charlotte Symphony -- Barbara Albin -- Raffaele Ponti."   All I can say is, "Wow!"

If you like Sacred Subway, there are lots of ways to see more of Barbara's work.  You can go to her website.  You can stop in to our local artists' co-op, Sea Grape Gallery. (Several of the other artists participating in Symphony at an Exhibition also show at Sea Grape.)  Or--my personal favorite--you can go visit the Four Artists show in the Goff Gallery at the Visual Arts Center through the end of the month.   Don't forget to bring your checkbook!
at January 11, 2014