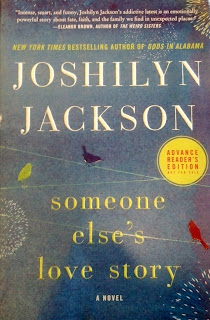 Someone Else's Love Story had me from the first page.  "I fell in love with William Ashe at gunpoint, in a Circle K... I thought then that I had landed in my own worst dream, not a love story.  Love stories start with a kiss or a meet-cute, not with someone getting shot in a gas station minimart."  And with that I was launched into the story of Shandi Pierce, a single mom working to finish college while raising Natty, her three year old genius son.

Pierce spends the first 75 pages of the book in that Circle K, telling us a bit about her characters' back stories as the situation unfolds.  I instantly fell in love with Natty with his "old man vocabulary."  (The reader is first introduced to Natty over lunch.  When Shandi urges him to eat he says, "I will.  I have to consider the peas.")   As I started to get to know Shandi, I liked her intelligence, her open attitude, and her total commitment to her son.  Then I found out that Natty is the product of a "virgin birth," leaving me to wonder if (i) Shandi is a total nut job or (ii) I had stumbled into some kind of updated birth of Christ story.  (Neither is the case.)   William is a bit more impenetrable emotionally.  The reader learns that he suffered a horrendous tragedy that took his wife and child away from him.  This alone would be cause to be withdrawn from the world, but it turns out that there are multiple reasons for his approach to life.  To get back to the story, at the moment the robber pulled a gun in the store, Shandi found herself a few feet away from Natty.  William's immediate instinct was to place himself between the gunman and Natty to protect the child from any harm.  And with that, Shandi, Natty, and William's lives become interwoven.

Jackson has put together a cast of characters that made me want to keep reading.  I particularly liked Jackson's development of William's character and story (which left me alternately laughing and heartbroken).  And I liked the fact that, at the end of the day, Shandi and William helped each other come to terms with their pasts in ways that left them able to move forward with their lives.

Someone Else's Love Story will be out in stores in November.  (Yes, this is one of my Book Expo finds!)   Jackson has a number of other books to her credit, including Gods of Alabama and The Girl Who Stopped Swimming, that you can check out in the interim.   I'm keeping my fingers crossed that I've found a new author whose writing I'll consistently enjoy.   Happy reading!