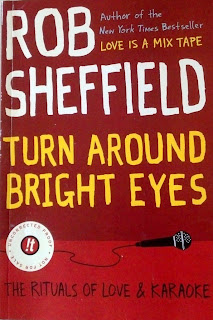 I was intrigued the moment I heard about the concept behind this memoir by Rob Sheffield.  It's a sequel to Love is a Mix Tape, a New York Times bestseller that flew well below my radar.  If you search back into your memory before the days of MP3 players, you may remember putting together a cassette tape of songs for your or a friend's listening pleasure.  Surprisingly (not), I was never adept enough at the technology to create one myself.  But I did have a couple of great mix tapes that my friend Ellen put together (with songs by the likes of Robert Palmer and Roxette) to keep me going when I went for a run.  (As you can imagine, this was long ago and far away,  Back in the 1980s, I would on occasion head out in the morning for a jog around the Central Park Reservoir wearing a fanny pack holding what would now seem an unimaginably bulky Walkman.)

Sheffield has adapted the concept of a mix tape to his memoirs, with each chapter developed around a song or musician/band.  I will say upfront that I didn't immediately get into this book. Sheffield is in serious need of an editor who won't let him make the same point over and over within the space of a few paragraphs.  And I couldn't get a handle at all on Sheffield as a person.   As a writer for Rolling Stone, I envision him as a hip rock and roll guy.  But as you read the book, you realize that Sheffield could win an award for being the man who's most in touch with his feminine side.  He talks at some length about how he immersed himself in Lifetime movies when he was grieving for his first wife (who died suddenly at the age of 31 from a pulmonary embolism).  Really?  Of course I feel bad for the guy, but I don't even know any women who watch Lifetime movies.  And he is way, way, way too relationship/feelings oriented for me to recognize as an American male.  (Perhaps this is just my personal experience.  If you've met my ex-husband, you know that he's not exactly what you'd call a touchy-feely kind of guy.)  Add to that the whole karaoke thing, which I cannot relate to in the least.   Nonetheless, I kept reading Turn Around Bright Eyes and ended up thoroughly enjoying Sheffield's interesting and funny stories and insights.  Here are some tidbits that I wanted to share:

Karaoke Culture.  "Karaoke" is from the Japanese word meaning "empty orchestra."  (Similarly, "karate" means "empty hand.")    I have always thought that karaoke just took place in a bar where you sit and drink in a large room and wait your turn to belt out a song or two.  Wrong!  If you're really into it, some karaoke bars have private rooms that you can rent where you and your friends have the mike all night long.  Sing Sing (a chain with two locations in New York) is just one option.  http://www.karaokesingsing.com/  Sheffield says about Sing Sing that, "There's a door guy checking drivers' licenses, probably wishing he could be the door guy somewhere swankier, maybe a club where they have a velvet rope and a strict no-Journey policy."  (I thought this was funny even though I don't understand the Journey reference.  I learned later in the book that Journey was the first band to discover their lead singer when he was doing Journey karaoke. I think that's funny too.)

Rock 'n' Roll Fantasy Camp.  Did you know there was such a thing?  (Both my sister and my nephew did.)  For $5000, you can go to rock star camp for a week where the counselors are people like Billy Joel's drummer and Ted Nugent's guitarist and Peter Frampton's keyboardist.  Sheffield's retelling of the experience is quite hilarious, and he has no problem confessing that he ended up as the tambourine player for "his" band during the camp.  He admits that, "I have become obsessive about my tams.  Sorry -- my tambourines.  By now, my legs are in horrible pain [from hitting himself with his tams], and I can barely walk.  I start taking my tambourine with me into the bathroom, because I read somewhere that Eric Clapton used to do that with his guitar, so I learned to balance the tambourine on my head."

The Blame Game.  Sheffield talks a lot about how karaoke has invaded popular culture.  The topper, however, has to be an MTV show that's been on the air since 1998 called The Blame Game.  It is a show where couples who have broken up air their dirty laundry in public to find out who was "right."  Serious issues are considered, such as "The Case of the Tube Top Tease."  And at the end of each show, each person testifies in the Karaoke Chamber, singing a song to make their case.  What???!!!

Karaoke and Relationships.  Even though I was rolling my eyes at Sheffield's sensitive nature, I liked some of the things he had to say about relationships.  Sheffield acknowledges that his collection of Welcome Back, Kotter tapes might not have made him a chick magnet.  But, he says, "Don't we all have Kotter tapes in our closet?  Or their spiritual equivalent?...Is there such a thing as romantic love that does not depend upon someone embracing my deficiencies?"   He also talks about how karaoke is one of the ways that he and his wife communicate.  They are building a "shared language out of the things that fire up [their] blood.  Couples need as many of those languages as they can get."   A truer statement may never have been spoken.

There you have it:  my quick and dirty take on Turn Around Bright Eyes.  I still can't say that this is a "must read" book.  I will admit, though, that I laughed a lot while I was reading it, and I've found my conversation interspersed with stories from the book since I finished it earlier this week.  And I'm not even into music.  So if you're looking for a quick, entertaining read, check out Turn Around Bright Eyes.  Who knows?  It might even inspire you to hit the karaoke circuit!
at August 12, 2013