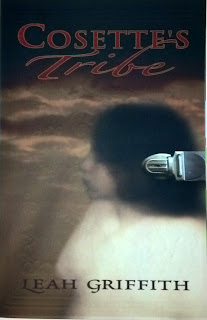 I met Leah Griffith a few months ago, and I immediately liked her.  She's warm and funny and very down to earth.  I knew that she'd written a book--Cosette's Tribe--but I hadn't gotten around to reading it yet.  Meeting her moved it up on my list, but it still didn't make it to my night side stand.

Fast forward to late February when Leah did a reading from Cosette's Tribe at Copperfish Books.  It was the first reading she'd ever done, and she was more than a little nervous.  Leah calls the book a work of "faction;" not a memoir exactly, but not fiction either.  It's a story she says she's carried with her her entire life.

As Leah began reading, her voice morphed into that of ten-year old Cosette.  I was enthralled as she read the opening paragraph of the book:

Sometimes I feel like there's too much room inside of me, and that things are knocking around in there.  I got a lot of secrets knocking around inside of me for a kid.  Things I can't tell anyone.  Ma would die if she knew some of the stuff I've been up to.  I wish I could feel happy again like when I was little.  I didn't have any worries back then because my soul was still white like the truth."

I left the reading with a signed copy of the book and started it immediately, the voice of Cosette still in my head.  (None too coincidentally, "Cosette" is Leah's middle name.)   The book tells the story of a young fatherless girl whose dream is to build her own tribe of friends and family.  When Cosette meets Ken, the uncle of a friend, she thinks he might be a good addition to her tribe, not to mention a good companion for her mother.  Things don't quite turn out as Cosette had planned, however, when Ken's attentions fall to her, leaving Cosette with the secrets referred to in the opening paragraph.  (Note:  This occurs within the first few pages of the book, so I'm not divulging too much of the plot.)

The book is both heartbreaking and joy-filled as we follow Cosette through a year of her life.  We learn about her relationships with her sisters and her first boyfriend and the hippie who lives across the street.  Leah's writing is full of metaphors that bring the words to life.  Take, for instance, a winter day when Cosette runs to a wall "piled with snow, like the meringue on Ma's lemon pie" or the time when she's being pulled from under a bed by Ken "until [she] popped out . . . sideways, like a piece of toast."   The primary thing that struck me about Leah's writing, though, is the sense of honesty that shines through.  It's the story of her childhood, for better or for worse, and she's put it out there for others to read.

It takes a lot of courage to write so frankly about incidents that others would sweep under the rug.   Leah shared that she realized during the writing process that there was a lot of "light mingled with the darkness" of her childhood.   When asked about her family's reaction, she told us that she waited to write the book until her mother had passed away.  The rest of her family has been incredibly supportive.  We also learned that the cover of the book is a picture of Leah from circa 1965 or so (taken by her hippie friend), which is kind of cool.

I'm sure that my appreciation of Cosette's Tribe was enhanced by my new friendship with Leah and by having been to her reading.  I strongly suspect, however, that if I had read Cosette's Tribe on the recommendation of a friend, I would have enjoyed it for the well-written and compelling story that it is.  The only way for you to find out is to grab a copy and read it yourself.  I look forward to hearing what you think.