Setting the Stage at Asolo Rep

Part of the magic of going to the theater is being transported to another place and, often, another time.  This is where the role of the set comes into play.  Having the right scenery and props makes the job of the actors easier, both for themselves and for the audience.  Last week, I had the opportunity to take a peek into what goes on at the Robert and Beverly Koski Production Center, which is where sets for Asolo Repertory Theater productions come to life.  It was a real treat.

The Asolo is rightfully proud of its production center.  After 45 years of renting space for its scene shop, the Theater purchased this 40,000 square foot space three years ago.  The building contains rooms for offices and rehearsals, storage space for costumes and sets, and a large area for set and prop production.  Our tour started in the rehearsal hall, where we could see the "marks" on the floor for the actors working on the upcoming production of Clybourne Park.  Renderings of the costumes for each actor were pinned up on one wall, enabling the actors to envision what they will be wearing onstage.  We saw a drawing of the two sets for the show (one for each act) and the doll house-sized model that was built on the basis of these drawings.  Some of the props for the show were stacked in a corner of the room to help set the mood, and they ranged from National Geographic magazines to an old-fashioned black rotary dial phone to a shopping bag from the now-defunct Gelman's department store.  We found out that the only portions of the set that the actors practice with before moving their rehearsals to the theater are doors and steps.  We were now primed to see where the sets are created. 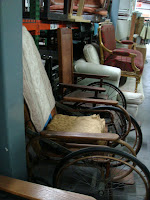 Our first stop was the multi-level storage area.  Everywhere you looked were sofas and chairs and lamps and all of the other "stuff" that you find when you look around your home.  We learned that 70% of the furniture is donated, 20% is built and 10% is purchased.  We also learned that other local arts organizations have access to the Asolo's set department to find items they need for their productions, be it a lamp or a backdrop from a recent production.   Pretty cool.

From there we moved on to the production area where sets are created.  During our visit, there were only three sets in production--Clybourne Park, The Game's Afoot, and a third that I didn't catch the name of.  With its expanded space, up to six sets can be built at a time, permitting the Asolo to construct sets for both its own shows and productions for other theaters. As a result, this department has become a revenue generator for the Theater and employs 12 people on a full-time basis.  Since last June, 18 sets have been built there, half for Asolo productions and half for productions elsewhere.

Clybourne Park opens on March 15th, so the set for that show was nearing completion. (Rehearsals--along with the sets--generally move to the theater ten days or so before the show opens.)  The first act of the show is set in 1959; the second act is set 50 years later.  The same house is used for both acts, but the sidings are reversed (no wood paneling in 2009!) and the furniture is swapped out.  Hearing about what happens during intermission reminded me of NASCAR mechanics switching out tires during a pit stop.  There is no room for error, and a lot of choreography is involved.  And just to make the process even more complicated, the Asolo is a repertory theater, so there are multiple shows on the stage at the same time.  This week, for instance, Glengarry, Glen Ross, The Heidi Chronicles, and You Can't Take It With You are all on the calendar.  This means that after each performance, the set for that show has to be broken down to make way for the set for the next show.  (I have thought about how challenging repertory work must be for the actors, but never from the perspective of the stage hands.  What a lot of work!) 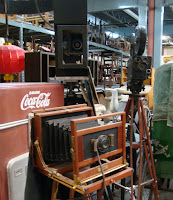 Our final stop on the tour was the props department where we met with Senior Properties Manager Jeffrey Dean.  The objective of the prop master is to fake out the audience by making the props look as authentic as possible without actually being the exhorbitantly expensive real thing.  The creativity that is required in this job is amazing.  Take, for instance, this camera.  The bellows for the camera is a painted lamp shade. For the film camera in the background, pie tins were used for the camera and PVC pipes for the lenses.  When I heard this, it all made perfect sense, but to have the vision to come up with it is something else entirely.   (My friend Dorrit was with me on the tour and aptly commented that the way Dean recycles items for his props reminded her of the "art" that Howard Solomon has created at Solomon's Castle. There is apparently something to be said for hoarding!)

In addition to creating the props for the Asolo's shows, Dean designs the sets.  (His resume as scenic designer lists over 200 shows.)  If you have any question about how important set design is to the success of a show, just check out Kay Kipling's review in Sarasota Magazine of You Can't Take It With You.  Her review comments on the set before any of the individual actors, saying,  "From the moment we see Jeffrey W. Dean's design of the Sycamore-Vanderhof home in New York City, circa 1938...we want to inhabit the world Kaufman and Hart's lovingly conceived family members breathe in."

As I left the Koski Production Center, I had both a greater appreciation of what goes into putting a show together and a burning desire to see the shows whose sets I saw in production.  You'll find me at Clybourne Park and The Game's Afoot this spring where I will enjoy my bit of inside information about what went into getting those shows onto the stage.   Watch this space for my reviews!