Sometimes the stars just align.    I've been listening to Dave Barry's audio book, "I'll Mature When I'm Dead," which is pretty darn funny and sheds great light into the male perspective on [insert random category here].  On my way to the airport to catch my flight to New York, I enjoyed his rant/essay about the TV phenom that was "24."  In Barry's version, the latest president of the United States is a kangaroo and Jack Bauer has miraculously recovered from being decapitated and bitten by wild boars.  (Really, it's not that much more unrealistic than some of the show's actual plot lines!) 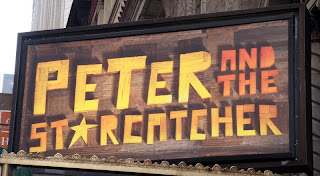 Cut to my first theater experience on this trip--"Peter and the Starcatcher."  I was perusing the program and came upon Dave Barry's name as the co-author (along with Ridley Pearson) of the novel that inspired this hilarious play that my friend Andrea described as equal parts "Wicked" and "The 39 Steps."  What a coincidence!!!

As you probably know, "Wicked" is the prequel to the classic Wizard of Oz and gives us the back story to why the Wicked Witch of the West is so, well, wicked.  (As an aside, I saw "Wicked" last year at the Barbara B. Mann theater and our seats were so high up that I might as well have been watching from outer space.  It was an incredibly disappointing theater experience after years of wanting to see this show.) "Peter and the Starcatcher" tells the story of how the characters in Peter Pan came to be, and it is incredibly clever.  We learn why Peter wants to stay a boy forever and how Captain Hook loses his hand and why the Crocodile ticks like a clock.  We discover the reason for the connection between Wendy and Peter and the lost boys and how Tinkerbell came into existence and how Neverland got its name. I can only imagine what great fun it was for Barry and Pearson to develop these story lines and for playwright Rick Elice to adapt them for the stage.

The comparison to The 39 Steps comes from the incredible creativity in the staging of this play.  Though the show has a couple of musical numbers, it is definitely not a musical.   Nonetheless, I kept thinking how clever the choreography was.  The playbill gives Steven Hoggett a credit for "movement," which is a much more appropriate--if vague--description of what was going on onstage.  I know that it won't make any sense when I tell you that the cast members use a rope to define both space and mood throughout the play, but they do, and it works beautifully.   The play is also somewhat reminiscent of The 39 Steps in its use of puns and one-liners.   Two of my favorites were "no man is an archipelago" and "you're just splitting rabbits."  (I have to admit to a delayed reaction to the latter.)

The cast of the show was wonderful and puts on a true ensemble performance.  I was not familiar with any of the actors (although most have made their requisite appearance on Law and Order).  I didn't mind that the cast had no big names, since having a "star" onstage can lead to my focusing on the actor rather than the story.   Celia Kennan-Bolger plays Molly and was a bit of a stand out, not only because she was the only woman in the cast.  Her relationship with Peter and the other orphans and their on-going dispute as to whether a girl could be the leader of their little troupe was particularly charming.

The one element of the play that I didn't quite get--and that I suspect wasn't in the book--was the homoerotic overtone that came into play both in the casting of a man as Molly's nanny and in Captain Hook's demeanor.  Maybe this was a reference to Michael Jackson's Neverland.  Maybe the playwright thought it would give the play a more adult dimension.  Or maybe it just seemed to fit with Captain Hook's rather campy character.  Whatever the intention was, I didn't feel that it enhanced the story.

"Peter and the Starcatcher" is closing in late January, and I urge anyone who hasn't seen it to do so.  (Discount ticket offers abound!)  If you don't catch it now, the show will be starting a national tour in August, 2013.  I am hoping that Peter and his friends will make a visit to my neck of the woods.  If they do, you can bet that I'll fly right out to get tickets.