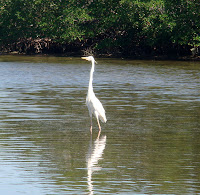 With our Groupon coupons tucked away in our bags, Dorrit and I headed down to Bonita Springs last week-end for a kayak eco-tour with Adventures Kayaking.  It was a perfect afternoon to be out on the water.  The tide was VERY low--as you can see by this picture of a heron barely up to its ankles in water--which gave us an opportunity to see lots of birds feeding.   Before we were more than 100 yards from shore, our guide Sterling was scooping critters up in his net for us to take a look at.  He was particularly excited about the pygmy sea horses and put them in a jar for our viewing pleasure. (They weren't kidding when they named them pygmy sea horses.  When full grown they measure no more than an inch, so you can imagine how tiny and adorable these babies were!)   We saw blue crabs and horseshoe crabs (a species that dates back 400 million years) and a lightning whelk that was home to a shy hermit crab.  We learned about soft coral (which is an animal) and hard coral (which is a symbiotic creature which is part animal, part algae). 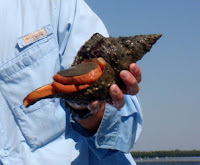 I got my first look at a horse conch, which is proud to be the Florida state mollusk. (Dorrit and I wondered later how many states have an official mollusk, but I digress.)   You can see in this picture the "leg" of the mollusk.  It can extend up to five or six inches and exudes an acid when it is wrapped around a plant or animal that enables it to suck out its nutrients.   (I find myself wrinkling my nose as I write this because it is really kind of gross.)   The horse conch protects itself from predators by withdrawing into its shell and using its hard surface as a sort of door. 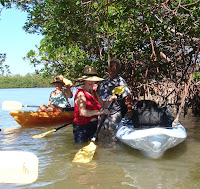 Much of the time we were kayaking in Estero Bay along a boat channel, which wasn't particularly pleasant.    Many of the boats barely slowed down as they went by, and on more than one occasion my kayak was swamped when I wasn't able to turn its nose into the waves in time.  Eventually, we made our way through a mangrove tunnel into Lovers' Key.  While going through the tunnel, I had to duck to avoid some low lying branches.   A couple in a tandem kayak in our group had the same trouble but decided to grab hold of a branch to guide their way through.  Before they knew it, their kayak had flipped.  Luckily, the water was neither cold nor deep, but it was still a bit embarrassing for them.  (It was a first for our guide, too, who had told us at the outset that the only way to tip over was if you tried to get into the kayak feet first.)

From there we paddled into a quiet cove and came upon a bunch of manatees "socializing."   Often when you see manatees, you just catch a glimpse of their noses when they come up for air.   They are generally on the move or scavenging for food.   (They eat about 20 percent of their weight in sea grass every day.  Since the average weight of a manatee is 1200 pounds, feeding themselves is a pretty time consuming endeavor.)    When they come to Lovers' Key, though, their objective is really just to relax and enjoy some companionship in a safe place where no combustion engines are allowed.  And we were privy to some manatees doing just that.  We learned that the frolicking conga line of manatees was a bunch of male manatees vying for the romantic attention of the female manatee.    The female was in the lead, and wherever she went three males would follow, wooing her with their swimming skills and their "singing."  (When they come up for air, manatees make quite loud noises that sound very similar to a sneeze.)    Sterling told us that a female manatee mates only once every three years or so, so she wants to choose her partner carefully.  This explains the weeks of foreplay that often go on before the romance is consummated (which apparently consists of the two manatees swimming belly to belly for about 30 yards.  I don't quite understand the logistics, but it's nothing that I want to think about too much.)   It was very cool to be up close and personal with these huge mammals, which swam close to each of our kayaks.  We all got great views of not only their noses coming up for air, but their bellies, backs, and tails.

After we'd had our quality time with these "sea cows," we started paddling back to our starting point.  It was quite a hike back--at least 45 minutes of real kayaking--but well worth it after the show we'd been treated to. A baby dolphin accompanied us part of the way home, which made our smiles a little wider.   As we pulled our kayaks back onto shore, we were more than satisfied with our outing--and more than ready to put our feet up and have a cold drink!   Another fun day in Southwest Florida.