Kidding Around at the Isles Yacht Club

My buddy Bruce recently shared a somewhat horrifying statistic with me.  The median head of household age in Charlotte County is 62 1/2--the highest in the entire United States.  (He then thanked me for helping to bring the age down.)   So it probably isn't surprising to hear that I immensely enjoyed helping out at the annual kids' camp at the Isles Yacht Club.  After all, it's a bit of a novelty to see children around here! 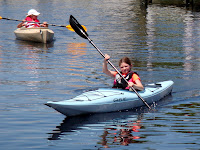 Twenty-four kids ages six to 14 piled into IYC on Monday morning for orientation after being slathered with sunscreen by their parents and grandparents in the parking lot.   After a quick overview of what the week would hold, the kids were broken into two groups (port and starboard) and headed off to their respective activities.   All I can say is that I wish that I could go to camp at IYC!

The kids played tennis and water volleyball and kayaked and swam.  They painted picture frames and played ping pong and had a pizza and movie night.  They even raced the little dinghy sailboats (with assistance from adult sailors, of course, and two safety boats along in case of emergency.)  (Having sailed in these boats and spent some time in the canal as a result of my expert helmsmanship, I was impressed to hear that not a single boat tipped over!)

My specific contribution to the week was to act as Ms. Manners (which seemed to make everyone laugh, although I'm not sure if it's because I don't seem the most logical choice for the job or because it's not exactly the most popular topic for the campers.)   When I first moved to Florida at age 11, my mother had the bright idea of sending my sister and me to what was then quaintly called charm school.   I remember being humiliated when she forced me to wear white tights (which I considered quite babyish) with my dress and being quite bored by the program.  So it was my mission to try and make the topic of manners fun for our campers. 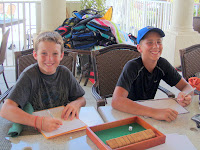 The camp organizers knew that the kids' attention span for etiquette lessons would not be very long and wisely allocated Ms. Manners only ten minutes or so before lunch on three days.  Dorrit gamely agreed to help out, and found herself functioning primarily in the role of Ms. Anti-Manners.   One day we focused on making a good first impression, with the campers shaking hands with Dorrit and me (making good eye contact and saying how nice it was to meet us) before lining up at the grill to get their burgers.  (They did a remarkably good job of keeping their eyes on us rather than on the food.)  The next day we did a little skit of two friends sitting down to lunch when one of the women (that would be Dorrit) gets a call on her cell phone and rudely proceeds to turn her back on the other woman to go over a grocery list with her husband.  (The kids didn't have any trouble understanding why that wasn't very nice.)  The final day we did a skit imitating a child (that would be Dorrit) ripping open birthday presents, only to be quite vocally confused and disappointed by what the boxes contained.  Of course, she had no idea who had given her the gifts since the cards had been lost in the process.  I had an extra present that the kids vied to open to see if they could come up with something nice to say about what was inside (a box of Christmas lights--how seasonal!)  My impromptu assistant was a seven or eight year old boy and he was terrific, reading the entire box to make sure that all of the features of the lights were mentioned in quite an enthusiastic voice.   We talked about table manners and treating people in a considerate fashion, and the kids actually participated a lot.   I was delighted when I received a thank you note from one of the campers at graduation saying that she had fun with Ms. Manners.  Success!   The note also contained a picture of someone exhibiting bad manners (that would be Dorrit) and someone exhibiting good manners (that would be me!)

It was lots of fun to help out with the camp and to spend time with the kids.   I give a huge amount of credit to Joyce Tilden and Skip Mansfield, who organized the camp, and kudos to the many, many volunteers who worked to make the camp a success.   I have no doubt that when our campers get back to school and go through the "what I did on my summer vacation" routine, they will talk about the camp with big smiles on their faces.  And--like the hokey pokey--that's what it's all about.
at July 16, 2012