The Monday of Book Expo week is like the calm before the storm.  The Expo is a working event for publishers and writers, so I'm sure there's a lot that goes on that day.  For attendees like me, though, the only event of interest is the session at which editors from six different publishing houses share their views about why their upcoming releases are special.  Two hundred books were submitted for consideration as a "buzz" book.  It would be fascinating to know more about how the books featured at this event were chosen.  I don't have that insight to share with you, though, so I'll settle for a recap of the books that were selected.

Brain on Fire: My Month of Madness by Susannah Cahalan (editor Millicent Bennett from Free Press).  Brain on Fire was the only non-fiction book in the group.  It is the story of a New York Post reporter who developed an auto-immune disease that manifested itself through seizures, psychosis, and catatonia.  The disease was ultimately diagnosed and  successfully treated.  Brain on Fire is an expanded version of Cahalan's article about her experience that ran in the Post.  (http://www.nypost.com/p/news/local/item_OseCEXxo6axZ8Uyig17QKL)  It doesn't sound up my alley but Bennett has some good credentials as she also edited Colum McAnn's Let the Great World Spin. 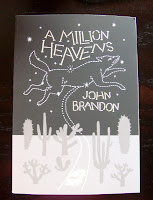 A Million Heavens by John Brandon (editor Eli Horowiz from McSweeneys).   A Million Heavens was touted as a "supernatural romance" with an odd cast of characters.  Horowitz, who has also edited Stephen King's books, used the adjectives "funny, sad, strange, peculiar, familiar, and surreal" to describe this novel, which they are hoping will be Brandon's break-through work. (Brandon also wrote Arkansas and Citrus County.)   It sounds a bit out there for my taste but I do like the cover.  Here's a snippet from the book (originally slated to be called The Vigilers) when it was in progress.   (http://blogs.wsj.com/speakeasy/2010/07/05/new-fiction-from-citrus-county-arkansas-author-john-brandon/)   Just for a bit of connection, John went to University of Florida and is a huge Gators fan.

In the Shadow of the Banyon by Vaddey Ratner (editor Trish Todd from Simon & Schuster).  In the Shadow of the Banyon is a novel (with autobiographical overtones) about a young girl coming of age in Cambodia during the regime of the Khmer Rouge.  Ratner came to the United States when she was 11 years old and was mute in response to the horrors to which she had been a witness.   Todd compared the book's intensity combined with strong story telling elements to Little Bee, The Diary of Anne Frank, and The Killing Fields.   Definitely not a beach read, but it is on my list.   If you're interested in reading a bit about Ratner and the process of turning her life experience into a novel, check out http://www.vaddeyratner.com/q-a/.

Panorama City by Antoine Wilson (editor Lauren Wein from Houghton Miflin Harcourt). In Panorama City, the 28 year old protagonist thinks--mistakenly--that he is on his death bed and dictates the story of his life to his unborn son.  Wein said the book, "goes down like a chocolate milkshake but has the benefits of a kale soy smoothie" with its references to sources as varied as the bible, mythology, and Cervantes.  Sounds a bit over my head!   Wilson's website is pretty funny, though, as he shares his insights into the writing process and the truth behind his publicity shot.  http://antoinewilson.com/wotwhat/

People of Forever Are Not Afraid by Shani Boianjiu (editor Alexis Washam from Hogarth).   People of Forever is another novel with autobiographical elements.  It is the story of three young girls who join the Israeli Defense Forces.  The book reveals the juxtaposition of these girls' worries about the kinds of things teen-age girls are concerned about (like boys and movie stars) while dealing with the realities of a military existence.  Last fall 24 year old Boianjiu was named one of the "5 under 35" fiction authors by the National Book Foundation.  (Here's a short interview with her, which is where I found her picture.  She is SO young.  http://www.thetkreview.com/2011/11/08/the-5-under-35-interview-series-shani-boianjiu/)  People of Forever sounds intriguing to me, not least of which because I have friends whose daughter just graduated from high school and is heading to Israel to join the IDF.   I am looking forward to reading this book and comparing it to Sara's experiences.

The Unlikely Pilgrimage of Harold Fry by Rachel Joyce (editor Kendra Harpster from Random House).  Harold Fry and his wife are leading a mundane existence in a small English village when Harold receives a letter from an old friend who is dying.  He writes an immediate response and heads out to the mailbox to mail it when he spontaneously decides to walk 500 miles to deliver the letter in person.   Needless to say, Harold has plenty of time during his journey to think about the past, and he meets some pretty interesting characters along the way.  In an interview with Joyce, she calls it a "coming of (old) age" novel, which I love.  http://www.scotsman.com/the-scotsman/books/former-actress-and-playwright-rachel-joyce-has-made-a-dream-debut-with-her-novel-1-2194169    Harold's story started as a radio play but Joyce realized that she had more to say about his pilgrimage (a word carefully chosen).  The Unlikely Pilgrimage of Harold Fry was already published in the UK to some acclaim, and I'm looking forward to finding out why.

At the end of the session, I was primed for three days of battling for galleys of books by both authors whose work I enjoy and authors who might join the list of my favorites.  As we headed out the doors of the meeting room, galleys of the books that had just been buzzed were piled up on tables, so I sharpened my elbows and dove in.   It was a great way to ease into the chaos that is Book Expo America.
at June 14, 2012