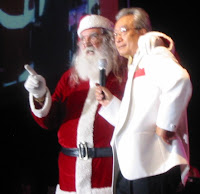 What would the holidays be without a bit of Christmas music? Each year our own Charlotte Symphony Orchestra gets into the spirit and presents a holiday pops concert. It was quite a different experience from one of CSO's classical concerts (and not only because Santa made an appearance!)

CSO's pops concerts are performed at the Charlotte Harbor Event Center in order to accommodate more people than the Charlotte Performing Arts Center can hold. Audience members are seated at large round tables and can enjoy adult beverages during the show, setting the tone for more of a party than a serious concert. Big screens are set up on either side of the stage to compensate for the lack of tiered seating. (Even though I was at a table in the front, I loved the screens, which gave me the chance to see the Maestro's expression as he conducted. They also permitted me to easily identify what instruments were being played. This came in very handy when the harp was being plucked or the French horns took the lead.)

The music was, of course, quite festive. The first half was "just" the CSO, with a few twists. I particularly enjoyed A Canadian Brass Christmas and Swingin' Santa is Coming to Town (with Robert Rosenstock playing a mean jazz piano). In recognition of his contributions to the CSO and the community, local real estate auctioneer Phil Wilson was invited to the stage to conduct the orchestra in its rendition of Sleigh Ride. It was quite hilarious to see Wilson wiggling his way through the song after having told the orchestra, "I'll get you started, and you finish up!" 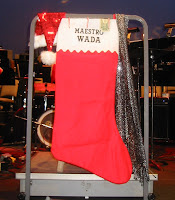 The extended audience sing-along was the only off key point of the evening (although it was quite popular with some of the folks at my table!) Cellist Charles Noble took over conducting while the Maestro walked around the audience and encouraged people to sing into the microphone. (Note to everyone: This might sound like a good idea on paper, but it's really quite painful!!!)

Steve March Torme, son of Mel Torme, joined the CSO for the second half of the show, singing some classic Christmas tunes and some of his own music. I loved It Happened in Sun Valley, a song from his dad's "vault" and one I'd never heard before. It was interesting to learn that The Christmas Song ("chestnuts roasting on an open fire....") was written by Mel Torme and Bob Wells on a sweltering July day in LA. Like his father, Torme is a real crooner, and his voice is well-suited to singing holiday favorites.

As the audience members streamed out of the Event Center I heard comments about how much fun the evening was and how the show put them in the holiday spirit. That constitutes a successful evening to me! Happy holidays!
at December 07, 2011