﻿﻿Last spring, I went "pedaling" in a kayak on an outing on the Myakka River.   It was great fun, so I was looking forward to this month's kayak adventure compliments of the IYC paddlers to Stump Pass Beach State Park in Englewood.   Our group of 17 paddlers arrived at the Park bright and early and was met by a kayak rental guy who provided kayaks for those of us who didn't bring our own.  The moment I was launched, I realized that paddling was going to be a whole different ball game than pedaling.   For one thing, I was at the back of the pack the whole morning.  Not a big deal, but I did miss out on seeing a school of ten+ sting rays that had swum off by the time I got to their location.  (I was excited when I thought I saw one near my kayak but then I realized it was a reflection from my paddle.  Duh.)   Another slight issue was that I wasn't quite as adept at steering as I was when pedaling, resulting in a couple of close encounters with the mangroves and, yes, a tree stump.
Notwithstanding that I need to get a copy of "Kayaking for Dummies," it was lots of fun.  We started on Manasota Key and kayaked around the end of the Key and over to what someone told us was Don Pedro Island State Park, where we got out of our kayaks for a nice walk on the beach and some shelling.   The beach is known for shark's teeth, which are not at all what you would imagine if you are envisioning the shark from "Jaws."  They are actually very small and black and I would have never identified what one looked like if someone hadn't shown me.  It was nice to have my feet in the sand.  Punta Gorda is wonderful in many, many ways, but it does not have beaches, and it's always a treat to have the waves lap your feet as you walk along the shoreline.

On the way back to our starting point, the current was against us and it was serious work.   It was a bit easier going if you hugged the shore, so I made an effort to do that but kept careening into other people's kayaks.  Luckily, our rental kayaks were plastic and seemed a bit like bumper cars so it wasn't an issue. 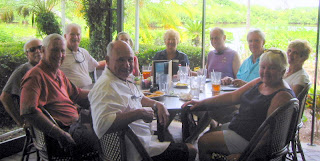 Eventually, we all made it back to shore and I happily relinquished my kayak back to the rental guy.   I had worked up quite an appetite and was looking forward to our lunch at Farlow's On The Water.   I hadn't been there before and they did a great job accommodating our group.  I had a tasty chicken salad with cranberries and apples and all sort of other goodies that provided two days' worth of lunches (which, surprisingly, I actually ate over two days!)    What a great way to spend the day!  And, boy, did I sleep well that night!    The Punta Gorda lifestyle will wear you out every time.
at September 24, 2011