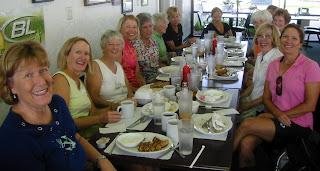 It's my first week-end back in Punta Gorda and I'm getting back into the swing of things here.  I am happy to report that the weather isn't nearly as hot and humid as I feared, and I've been enjoying some early morning biking with my friend Dorrit as I reacquaint myself with my environs.  I joined the IYC bike to breakfast group on Saturday for their weekly ride, and it was fun as always.  (Their philosophy is quite similar to mine--do a bit of exercise and immediately offset the benefits with a good complement of carbs, pork fat and other treats!)   This week the ride was to the SkyView Cafe at the airport, where the specialty of the house is an oatmeal covered French toast that is to die for. (They ask if you want sugar free syrup with that.  Really, what's the point???)  It's my favorite ride since it's the longest one and we seem to always find an interesting route.  Next week is the Smoke House, where the specialty is biscuits and gravy that are to die for.  (There is a trend here, in case you haven't noticed!) 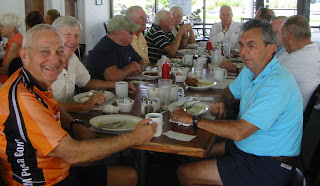 In addition to the fun of the ride and the food, the conversation is always lively and I always come away with some interesting tidbit of information, whether it's a vacation destination, a book to curl up with or a fun outing.  At least that's what happens at the women's table; since the men and women sit at separate tables, I have no idea what the guys talk about.   Here are some morsels from this week:

--Cultural Exchange Program:  Joanne and Richard participate in the Southwest Florida branch of Friendship Force (http://www.friendshipforceswfl.org/).  It's a combined cultural exchange, social and travel organization whose motto is "Change the Way You See the World."   This program of "friendship ambassadors" was created in the 1970s with the support of then President Carter.  The power of the concept was officially recognized in 1992 when Friendship Force International was nominated for a Nobel Peace Prize. In any event, Joanne and Richard are off to spend a month in Australia, two weeks on their own and two weeks with a host family that will give them the local view on life down under.   Joanne and Richard will then serve as friendship ambassadors here in the spring, hosting a Russian couple and showing them the ins and outs on life in Southwest Florida.  I'm sure that IYC will be a part of that experience.
--Cruise central:  Marsha and Ray just got back from a 35 day cruise to Greenland (she confirmed that's a misnomer!), Iceland and Europe.  I missed the whole story but there was something about a swimming pool and ice cubes at 11:00 at night that sounded particularly intriguing!
--Cool volunteer work:  Laurie volunteers once a week at Sallie Mae elementary school, working one-on-one with kindergarteners who can benefit from some extra attention.  Since I'm working at the Adult Learning Center, we had a great conversation about literacy and the differences between helping kids get a head start and helping adults achieve their educational goals later in life.
--Recommended reading:  The Art of Racing in the Rain, Room and Cutting for Stone got good reviews.

I also came away with reminders of dates to put on my calendar for biking and kayaking outings, lectures, and other fun events.  Even though I've only been back a few days, my September calendar is jam packed.  It's great to be back in Punta Gorda!
at September 05, 2011