No, this isn't a typo of a reference to Doris Day (although I do find myself saying "que sera sera" more frequently than I used to!)   When I realized that I had several outings planned with my friend Dorrit for last Saturday, I dubbed it "Dorrit Day," and I have to say that it was a blast!   Here was the schedule:

7:00 --  Hopped on my bike to join Dorrit and the rest of the IYC bikers to head to breakfast.  This week's destination was the Smoke House where I resisted the biscuits with sausage gravy.  There was some interesting chatter about the Peace River Film Festival, but more about that later.  Hit the farmer's market on the way home.  (I decided this didn't count as an extra component of Dorrit Day since this is part of the weekly routine.)  Picked up some nice okra to make gumbo! 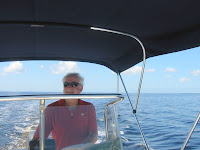 11:00 -- Headed over to Dorrit and Bruce's house to take their power boat over to the Isles Yacht Club for dinghy racing.    Captain Bruce (or "Mr. Dorrit" as one of my friends called him) was at the helm.  It was quite warm out so it felt great to zip along on the water.  There wasn't much wind at this point and I was a bit concerned about the heat (not to mention the racing).  There was some suggestion of bagging the races and taking the boat up river to the Nav-A-Gator for lunch and I was secretly (or maybe not so secretly!) hoping that we'd do that! 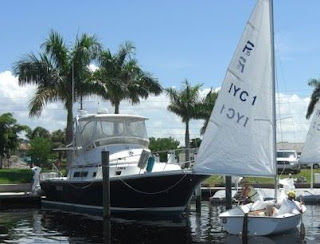 12:00 -- A group decision was made that there was enough wind to race so we got our boat (the aptly named "Courageous") ready.  Whenever anyone says that we have to "rig" a boat, I immediately feel that I am in way over my head.  Luckily, rigging the boat in this case only meant getting the sails up and daggerboard down (and draining the boat so that we wouldn't be weighted down with the rain water!)   Then we had to get the dinghies from the Club out to Charlotte Harbor.  This is kind of tricky since there's no wind by the Club.  You sort of paddle off the dock and get yourself into position to be towed by the Committee Boat.  I was on the tiller and Dorrit was a bit nervous at this point as we had a close encounter with another boat .  (When I asked Bruce to take some pictures, I didn't have this shot in mind!)   No harm, though, no foul. 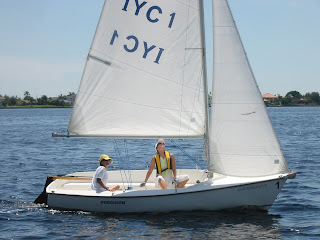 ﻿﻿﻿﻿﻿﻿﻿﻿﻿﻿﻿﻿﻿﻿﻿1:00 -- We were off to the races!  There are four dinghies and the other boats were manned by much more experienced sailors than I.  I ended up on the tiller for the whole day. (There wasn't really time for me to learn how to trim the sails and Dorrit generously let me do what I was more comfortable with.)  I'm sure she was wondering what she had gotten herself into as I inadvertently jibed on occasion rather than coming about.  The starts were not pretty, and at the very first mark we almost ran into another dinghy that didn't give us room.  (They had to do a 360 as a result, which was kind of cool.)    I had low expectations about how we would do but after we came in second on the first race, our competitive juices started flowing a bit.  I never really got us off to a good start but we ended up with two seconds, a first and (very sadly) a fourth that left us in second place overall for the day.    On the fourth race, the wind came up and we almost went over on at least two occasions.  (I am sure it's a comforting feeling when the helmsman is yelling, "What do I do???????!!!!!")   All in all, a highly fun and satisfying outing!

6:00 -- We got together with 35 of our closest friends from the Civic Association for dinner at Jack's before the Film Festival.  One of our dinner companions wrote down our names and contact info to give to her niece when she visits so that she can meet some nice "young" people in Punta Gorda.  (It is all relative.) 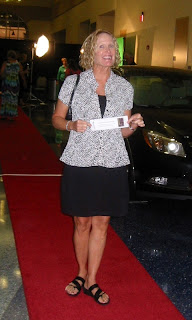 8:00 --  We made our grand entrance into the Peace River Film Festival.  Dorrit looked great on the red carpet.  Saturday night's offering at the Festival was a selection of films from the Black Maria Film Festival.  (FYI, "Black Maria" was the name of the motion picture studio that Thomas Edison built in 1893.  The Black Maria Festival has been in existence for over 30 years and 40-60 of the short films that are submitted to the Festival each year are chosen to be shown as part of the annual Black Maria tour.)    The films were incredibly varied and you could see that each filmmaker had a vision of what he or she wanted to share with the audience.  I particularly liked an animated film that was based on an autograph book of his grandfather's that the filmmaker stumbled upon and a film about the Lumiere brothers bringing movies to the big screen.  (The first audience fled the theater fearing for their lives when the film showed a train pulling into the station that looked like it was heading straight for them!)   I can't say I enjoyed all the films but I certainly respect the work put into them and give the filmmakers a lot of credit for getting their visions from their heads to the big screen.   Kudos as well to the organizers of the Peace River Film Festival for bringing this interesting event to little Punta Gorda!

After our fun filled day, I dropped Dorrit off around 10:45 and went home to collapse!   I will definitely have to rest up before having another Dorrit Day (but I am certainly looking forward to it.)  In the meantime, Dorrit and Bruce are going to be part of the "ambassadors" program at the Isles Yacht Club, helping new members integrate into the Club and all of its activities.   These unsuspecting people have no idea how much fun awaits them!
at September 13, 2011