Fun on the Bay of Fundy

Last week-end I had a little get-away with three of my women friends up to Annapolis Valley.  This is our second annual adventure, and it seems that we get in a week's activities in the 36 hours that we are gone!

We started off bright and early and headed to the Wolfville Farmer's Market.    (I am feeling a bit like a farmers' market junkie these days!)   The market was full of the usual suspects--produce with dirt still on its roots, flowers and organic products galore.  I enjoyed a breakfast of fish cakes with chow-chow, a real treat.  (Chow-chow is a relish made of green tomatoes, pepppers, cabbage, onions, vinegar and more and is a much tastier complement to fish cakes than tartar sauce.)  Thus fortified, we headed out on our explorations.

Our next stop was the Harriet Irving Botanical Gardens at Acadia University.   (Given the price of gas at the local Irving station, I'm glad to see that the family is giving back to the community!)   The gardens are open from dawn to dusk each day so that students and other Wolfville pedestrians can wander through them.  There was a beautiful pond with lilypads (in full bloom) and loads of blueberry bushes that we took a nibble from.  This quaint little bridge crossed over a stream and screamed out for a photo opp--we were more than happy to oblige!  The Gardens also have a conservatory that is adjacent to one of the most beautiful reading rooms I've ever seen.  Oversized leather couches and chairs, a huge fireplace and an incredible panelled ceiling made me want to curl up and read a while.  But we had miles to go before we slept so we carried on.

After an afternoon of wandering the towns in the Valley, we made our way to the Farmhouse Inn to get settled before heading out to see the production of Beowulf put on by Two Planks and a Passion Theater.   (The show was great and will be the subject of a separate post.)     A lovely evening was had by all before we retired to our coach house accommodations to rest up for the next day's activities. 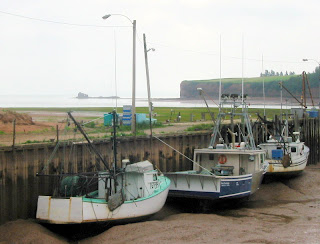 We generally like to build some physical activity into our get-togethers, and this outing was no exception.  Our first adventure of the day was a hike in Blomidon Provincial Park.  (Trust me, massive amounts of exercise were called for after our breakfast at the Inn of blueberry grunt--basically blueberry dumplings swimming in cream--and spinach and bacon quiche with some greens.)   We had hoped to have some great views of the famous Bay of Fundy tides during our hike, but the fog had settled in so we just had to apply our imagination to the look-outs.  We did, however, have other viewing opportunities during our journeys, including this dock with its working fishing boats "on the hard."  The Bay of Fundy has incredibly high and low tides that are on a six hour and 13 minute cycle.  When the tides are high, they are really high; when they are low, you can walk out onto the sand/mud beaches for quite a distance.   It's a pretty remarkable sight to see (although the smell that goes along with these tides leaves a bit to be desired.) 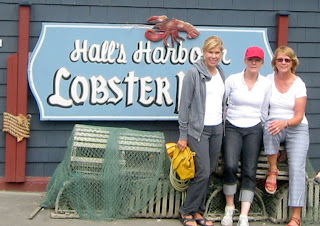 From there we were off to Hall's Harbour, a fishing village best known for its lobster pound.  Amazingly, we had worked up an appetite during our hike so we split a couple of lobster rolls with fries.  (When in Rome and all that.)  It was actually my first lobster of the summer and it was quite tasty!

The day had slipped away and it was time to head back home.  We stopped at another farmers' market and Guy's Frenchys (an indescribable chain of used clothing stores that are a fixture in Nova Scotia) on our way back to Chester where our husbands were eagerly awaiting our returns with open arms and lots of questions about our week-end.  (OK, not so much, but a girl can dream!)   Those of us with sailor husbands had one activity left before we could rest--a showing of the documentary "Deep Water" at the Chester Playhouse.  This movie chronicled the first single-handed round-the-world sailing race that took place in the late 1960s.  It was quite a sad movie, with one participant faking his coordinates rather than facing the financial ruin and humiliation involved with quitting the race.  The choice ended up driving him mad, and he committed suicide.  The high price of obsession.

Needless to say, the week-end was fun and filled with lots of interesting and varied experiences.  The best part, though, was the luxury of spending time away with good friends.   We're already considering itineraries for next year's adventure.  An outing to Ship's Company Theater in Parrsboro?   Music and hiking on Cape Breton?    I'm already looking forward to it!
at August 09, 2011