Biking with the HeartLand Tour

In 2007, 20+ doctors decided to ride their bikes across Nova Scotia to raise awareness about heart disease.  With that ride, the HeartLand Tour  was created   (http://heartlandtour.ca/).  My friends Pam, Pat and I participated yesterday in the fifth annual ride along the South Shore.  What a great day it turned out to be!  The weather looked a bit questionable at the start.  Having golfed the day before in what I consider British Open-like conditions (temps in the 50s and windy), I was a bit apprehensive when I woke to a dark sky.  But I layered up and headed to the meeting place, figuring that the first portion of the ride was a loop and I could bail at the end of that if conditions worsened.  Of course, I ended up being glad to be able to go back to my car after that portion of the ride--to get rid of some of my layers!  (One of my sailor friends here has an expression relating to the changeable Nova Scotia weather--"Go to the boat."  You really never know what the weather is going to be like until the moment of your activity so you should always go to the boat, go to the golf course, go to the ride.) 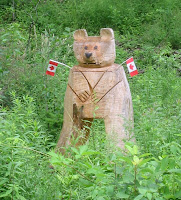 The best apart about the ride (other than being with my friends!) was that it was along the water almost the entire way.  In fact, we biked with views of three bodies of water over the course of the day--Mahone Bay, the LaHave River and the Atlantic Ocean.  The first leg of the ride was from Mahone Bay out to Indian Point and back.  I've driven out to Indian Point before to go to a friend's Friday "shareholders' meeting" (no shareholders, no meeting, just a bunch of guys talking mostly about sailing) and it is a gorgeous spot.  Rolling hills but nothing too extreme.  On the way back, I looked away from the water to find a surprise carving of a Canadian bear.   (I know he was Canadian because of the flags!) 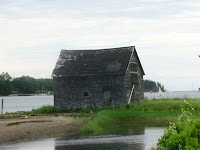 The next leg of the trip was from Mahone Bay to Lunenberg.  We did this ride last year, and it is really nice.  You ride along the water for a good bit of time then head into farm country.   It is always a bit of a surprise to me to see these rolling hills and barns in a seaside area.  We came upon a pasture with some cows grazing (and a sign about hamburger meat for sale--kind of puts a damper on that burger!)  Before long we arrived in Lunenberg, a working fishing and boatbuilding community and home to the Bluenose II.   We were treated to an incredible lunch on the waterfront outside the Fisheries Museum of the Atlantic.  (Here's a teaser--I bought a ticket on Groupon to go to the Museum, so I'll be posting about that later in the summer.) 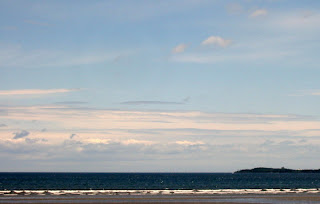 After feasting on the delicious wraps (I had the seafood made with lobster, crab, shrimp and scallops) and resting our legs, we headed out for the last portion of the ride--Lunenberg to Riverport.  The group headed out on a route that took them up a massive hill by the local golf course while we took advantage of Pam's local knowledge to go a back way that, while a bit less scenic, was less strenuous on our legs.  We made a stop at a little known gem along the way--Sand Dollar Beach.    (Note to riders--always use your hand signals when turning.  I made a left turn to head down to the beach without signalling and came extremely close to crashing with a rider who came up behind me.   Luckily he yelled out and we were both able to veer off and avoid what surely would have been a huge disaster.)    From there we made our way to the LaHave ferry and crossed the River.  We rode from the ferry landing to Pam's house  and ended up clocking between 30-35 miles.   (Trust me--that's the equivalent of at least 50 miles of Florida flatness!) 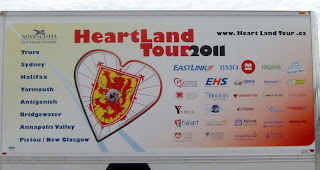 One amazing note about the ride--the whole thing was free!  The HeartLand tour is all about raising awareness about heart health by getting the community moving.  The entire event, including the swag support vehicle, the lunch and the post-ride activities, is made possible by the generous support of sponsors and the help of a lot of volunteers.   A number of the riders do the entire week of rides across the province.  Next year we plan to participate in at least one additional day of the tour (although we're going to skip the 120K day in Antigonish that has 60K of hills--if the woman who has clocked 2000K this year on her bike thought the hills were worth mentioning, count me out!)   Come join us!
at July 16, 2011