One of the nicest things about living in Florida is being able to spend time outdoors year round.   Last fall, my friend Pam suggested that we plan a spring bike trip.  I was all in favor (especially since this replaced her idea of running a tag-team half marathon of some sort!)  She spent some time looking around and came upon Bike Florida's annual spring tour, which was being held in the Gainesville area this year.  We had the option of riding for a week or doing the two day High Springs adventure.  We decided on the shorter trip and, with our new bikes and Pam's longtime friend LaNae in tow, headed off last week-end.
We kicked off our outing with a visit to the historic town of Micanopy (population 653--what a zoo it must have been when Michael J. Fox filmed Doc Hollywood there!) and a warm-up 18 mile ride on the Gainesville-Hawthorne Trail in Paynes Prairie Preserve State Park.    The trail was paved, the scenery was nice and we were rolling along quite nicely until the chain came off LaNae's rental bike.   I have to admit that my desire to be self-sufficient comes to an abrupt halt when the prospect of anything mechanical rears its ugly head.  LaNae and Pam are not so old-fashioned, however, and rolled up their figurative sleeves and tried to sort it out.   After a few minutes with little success, I began contemplating how we would get the bike back to the car (now approximately eight miles away).  LaNae is a woman of faith, though, and she wasn't ready to give up this fight.  Moments after she uttered the words, "Lord, please send us someone to fix this bike," our new friend Gary rode onto the scene.  As you can see from the picture, his outfit was quite striking (it actually had a little zip-up jacket that he was wearing when we flagged him down).  I know, I know, it's serious bike wear but you have to admit that it's pretty hilarious looking.  He did know his way around a bike, though, and fixed the chain with no problem (the trick was to yank on it before putting it back around the gears). 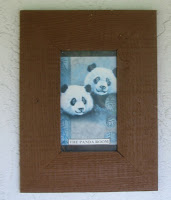 Needless to say, we worked up quite an appetite with all this excitement so we treated ourselves to a lavish dinner at a Tex-Mex joint in Gainesville before heading to our hotel in High Springs.  Participants in the Bike Florida trip have the options of camping out, camping in (in this case, in the hall of the First Baptist Church) or finding local accommodations.  If you choose to stay in a hotel, Bike Florida transports your bags for you from location to location during the week.  Camping is definitely not our style, so we booked the Zebra and Panda Rooms at the aptly-named Rustic Inn.  (I was quite stressed when I found out that they didn't have wireless internet but somehow survived three days without checking my e-mail.)  As you might be able to guess, each room was decorated with an animal theme (which was not nearly as kitschy as it could have been) and included a light switch designated for "mood lighting."  (I still haven't figured that one out).  The beds were comfortable, though, and the showers were hot with good water pressure so all in all there were no complaints.    After a good night's rest, we were ready to start on the official portion of our outing.
at March 31, 2011